'Love, Or The Witches Of Winward Circle' Book Review 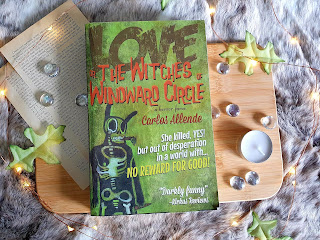 One of the thing's I've found from being a writer, even a small time relative nobody like myself, is that every now and then someone approaches you to review their work or give your opinion on something they've produced.

One of these such requests came to me from the author Carlos Allende.  Carlos liked some of the articles I'd written, some of the opinions I had on certain subjects based on my viewpoint as a transgender woman, and asked if I would read his book and give my thoughts on it from that perspective.  Actually, the exact words Carlos used were 'don't be kind, please destroy it', well Carlos, here goes...

'Love, or The Witches of Winward Circle' is a hard book to accurately describe, and I immediately found that even the description on the back cover led me to expect certain things of the story whilst reading it.  If you are able to bear with me for a moment I will try to explain what I mean.

The back of the book reads as follows, 'Nineteen-year-old Josie Garcia is torn between true love with a down-and-out poet and the monetary stability that only a rich husband can provide.  She owes rent - two months - and while her little landlady is docile enough to pretend that she has forgotten about the money, she's also a self-taught witch, planning to chop Josie's head off and use it as the main ingredient in a potion to recover her lost youth and become the beautiful woman she never was'.  After reading the blurb I dove into the book, and for the next 100 pages got to know who I believed was Josie.

The story begins with a dying old woman, a witch, who wishes to confess to her sins and absolve herself to god before she dies and gets dragged to hell.  We get to know the woman and her three daughters, Victoria, Rosa, and a third daughter who is very badly mistreated and never once even named.  Close to the first third of the book is spent getting to know this family, where we learn that witchcraft is very real, that demons and werewolves and vampires exist, along with some of the bizarre things the old witch did in service to the devil.

As the old witch dies and we begin to follow her daughters I believed that the youngest daughter was going to be the Josie that was described on the back cover, after all I'm a hundred pages in and she appears to be the main character.  In a curve ball of expectations though the author jumps the story forward by decades, jumping from the turn of the century to the 1950's.  It's at this point here, eight chapters in, that we finally meet Josie, who is the lodger at the home of the witch's three daughters.

This sudden shift in both the setting of the story, and the unusually late inclusion of one of the lead characters definitely put me on a back foot, I daresay a deliberate move from the author to surprise readers and show them that this is the kind of book that will go out of its way to supplant expectations.

In a development that seems to go against everything we learnt out the younger sister, still never named but referred to as 'the little woman', as having showed no desire to be anything like her witch mother suddenly finds herself craving the youth and beauty of the young Josie, and begins to teach herself magic in order to regain her youth.

What follows from here are two separate, yet interwoven stories, as the little woman tries desperately to find a way to bring her plans to fruition and Josie navigates her way through the complexities of her love life.

Things unfold in bizarre and almost ridiculous fashion, where strange coincidences and ludicrous decisions makes the plot wist and turn and develop in ways that you at first wouldn't expect.  Whilst some of themes events may feel a little too silly and unrealistic,the book makes clear from even the front cover that it considers itself to be a farce, and in that regard it definitely lives up to its claim. 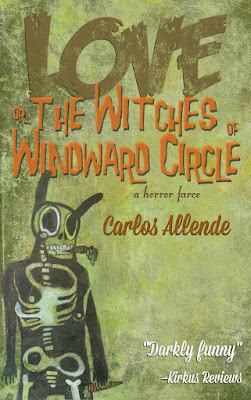 Whether it's accidentally murdering the wrong young woman, twice, or accidentally getting caught in the middle of a baby kidnapping and arrested, many of the situations in the book definitely meet the requirements of being exaggerated and over-the-top, though sometimes it does stretch this idea a little too far, and towards the end of the book the farcical nature was beginning to wear a little thin.  Luckily, however, the author didn't feel the need to stretch his story out overly long, and the book reaches a conclusion long before these comedic elements begin to detract from the overall quality.

The little woman is for me the most tragic character in the book, and one that I felt sorry for, despite her engaging in black magic, killing young women and even stealing a baby.  We see how even from an early age she was mistreated by her family, with her mother and her sisters treating her more like an animal than a member of the family.  We see how she works hard every day of her life to help people, and to make her horrid sisters comfortable but gets no thanks or kindness in return.  Despite going out of her way to perform some down right evil deeds the little woman is the character I felt the most for during the course of the book.

In contrast to this I found Josie to be a very shallow and at times nasty young woman.  The very first time we meet her she's lamenting over what to do with her life, which of her many boyfriends she should commit to.  What makes this scene feel quite horrible though is that when talking about her many suitors she appears to feel little to no emotion about any of them.  All that she cares about most is which of them has the most money, who can provide her with the most comfortable life.

Whilst Josie does end up sticking with the poor young artist Russell she is often complaining about his lack of money, the company he keeps and his inability to prove her with the lifestyle she wants.  She does things for selfish reasons, she lies and steals and intentionally hurts people just to get what she wants.  Despite everything she eventually goes through towards the end of the book, I never once feel sorry for her, or even really care about her.

Perhaps this is intentional on the part of the author, perhaps Carlos wants to buck tradition and have the stereotypically evil old witch to be the character you care for, whilst the innocent teenage girl acts like the heartless monster.

Other characters in the book can sometimes feel a little shallow and one dimensional, though there are a few exceptions, where I found myself genuinely wanting to know a little more about them.  Eva was one of these characters, a young woman who was friends with Josie's boyfriend Russell.  Throughout the book we get little pieces of her back story, and discover that Eva lived through the events of the holocaust, having been in the concentration camps in Nazi Germany.  We get teases of a character with a deep psychological scars, of someone trying to put their life back together after living through these very real horrors.  Unfortunately all we experience of Eva is through Josie's eyes, so she's made out to be a nasty woman, only out for herself and trying to steal Russell away from Josie.  Every time the two characters meet I end up wanting to see more of Eva, whilst also finding myself disliking Josie more and more.

I'm guessing it was some of these moments that made Carlos send me the book in the first place, that he wanted to know how a member of the LGBT+ community would take some of these offencive parts.  I can only speak personally here, whilst hearing people in the book using racist and homophobic language certainly took me out of the book for a moment whenever I saw it, it's true to the time and the setting.  I don't like that kind of language or sentiment, and whilst I believe that there is no place for it in today's society, it was something that was present during the 1950's.  There are certain parts of history that you can't sugar coat, because people have done some horrible things, but I don't think it should be included just for the hell of things.

In 'Love, or The Witches of Winward Circle' there are a lot of very open and free thinking characters, members of the laid back artistic community, and there are plenty of moments in the book that could include casual racism but don't, probably because a lot of these characters seem to be less bothered about certain topics such as race, gender and sexuality.  When towards the end there's a sudden outburst of homophobia, and some very horrible terms, it feels kind of out of place in comparison to the rest of the book, where many similar moments were not included.

I understand that this moment was an important one, that a certain character had to become angry enough to act in a certain way, but I'd like to think that there could have been another way to get to that point without having one of the 'heroes' of the story resort to calling someone a 'faggot'.

All in all I enjoyed the book, despite it being something that I probably wouldn't have picked up myself.  The story is different and interesting, and whilst some characters are very shallow and one dimensional, there are enough interesting characters to make up for that.

A quirky and interesting read, that will leave you both satisfied and a little baffled too by the end.  'Love, or The Witches of Winward Circle' never seems to take itself on hundred percent seriously, and isn't afraid of going against the norm in order to tell it's story.

Buy 'Love, or The Witches of Winward Circle' at:

Connect with Amy on LinkedIn
Join Her Fans on Facebook
Posted by Amy Walker at 15:55