The Book of Malachi by T.C. Farren - Book Review 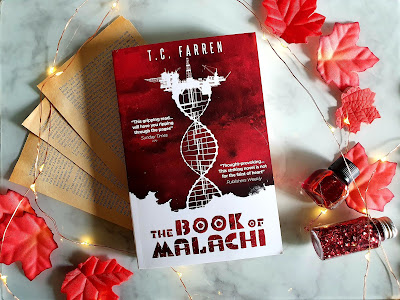 'Malachi, a mute thirty-year-old man, has just received an extraordinary job offer. In exchange for six months as a warden on a top-secret organ-farming project, Raizier Pharmaceuticals will grant Malachi a new tongue. So Malachi finds himself on an oilrig among warlords and mass murderers. But are the prison-donors as evil as Raizier says? Do they deserve their fate?

'As doubt starts to grow, the stories of the desperate will not be silenced - not even his own. Covertly, Malachi comes to know them, even the ones he fears, and he must make a choice - if he wants to save one, he must save them all. And risk everything, including himself.'

The Book of Malachi is a story set in some undefined near future, where science has advanced to a point to allow the growth of human organs in order to provide needed transplants, however, the practice seems to be less than legal, and as such leads to some shady and frightening practices. This is where Malachi comes into this story.

Malachi has spent years working in factories and on production lines, and has an impeccable work record. Thanks to his skills he seems like the ideal person to work for Raizier Pharmaceuticals, but the thing that makes him the perfect candidate is that he has no tongue. Raizier offers to give Malachi a new tongue if he comes to work for them for just six months, helping to take care of the prisoners on their off shore oilrig. Malachi agrees, believing that it's a good trade, that those people locked away in cages, used to grow new organs and go through rounds of surgery deserve their fate. They're murderers and rapists after all, why shouldn't they suffer if it means that they can save other people's lives?

However, Malachi quickly begins to discover that despite their pasts, the things that they have done, these people are still people; and they deserve basic compassion. Stripped naked, kept in cages, fed through tubes, their conditions are barely better than animals. And when they begin to tell Malachi their stories, the things that led them to this place he not only begins to see that they're in some cases victims of circumstance, people who have been forced into awful decisions, but some of them are just as much victims as he is.

One of the best things about The Book of Malachi is the surprising twists the narrative takes. I wasn't too surprised that Malachi comes to see the caged criminals as more than just incubators for organs, but it was the way their stories affected him, the parallels he saw to his own life that took me by surprise. We learn over the course of the book that Malachi wasn't born mute, but suffered something awful that led to him losing his tongue. Malachi eventually reveals the reasons for this to both the reader and the prisoners, and you see that this is not only the first time that he's ever shared this information, but just how much it affects him.

Malachi's journey through the book isn't just him learning to see the prisoners as people, but learning to see himself as one too. He's walked around with incredible guilt and self hatred for years, putting himself as the reason for the suffering he has been through, and lives that have been lost. It's through his interactions with these killers that he learns to let go of this pain, to start to see himself as a person worth loving, worth being proud of.

There are some characters amongst the prisoners that I don't think we're supposed to like, some whose crimes are completely unjustifiable, like the resident rapist, but with others it's not so clear cut. There's a character who admits to having killed his wife and her lover when he discovered them together, who lashed out in a moment of blind rage and deeply regrets what he's done. He's presented as a very clear headed and decent person, and one who's torn apart inside by the regret and grief over his past actions, and you can't help but feel a little sorry for him, acknowledging that this is a situation that you yourself could find yourself in. There are others who have more extreme stories, but who still manage to feel sympathetic, victims of circumstance.

Thanks to the duplicity and intentional harm being caused by some of the people working at Raizier, and the way they even treat some of their staff the people who think of themselves as being the 'good guys', as doing something shady in order to help others, it means that there's not really anyone in this book who can be seen as a good person. Every character here is a shade of grey, a victim or an offender in some way. They've all done bad things, or turn a blind eye to bad things. Because of this, the book ends up being an incredibly complex character study, even for the minor characters. It's a story where I don't know how I feel about the people involved, and at times don't know who to root for.

T.C. Farren has done a spectacular job at crafting a story that's going to test its readers. You're going to come away thinking about your own morals, about what you feel is good and bad, and how those ideas can easily be twisted to opposite means. Yes, some people have done awful things in their lives, and you might think there's nothing wrong in those people suffering a little if it leads to a good outcome, but does that make you a bad person if you allow that? The Book of Malachi asks if the ends justify the means, and if people are every truly evil or irredeemable. It's a book that will make you feel uncomfortable, but in a good way, in a way that will leave you stunned.