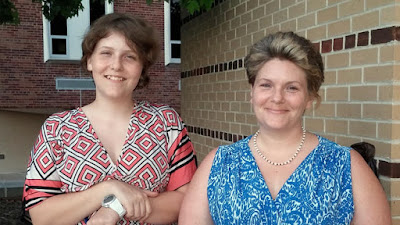 A 13 year-old girl and her conservative Christian mother are fighting against legislation that allows transgender students the right to use bathroom and changing facilities that match their gender identity, claiming that it will result in her failing High School.

Sigourney Cole has told school officials that she is being discriminated against because transgender students have been given the right to use the bathrooms and changing facilities that best match their gender identity.  Speaking out on the issue Sigourney told officials that she did not wish to use the same facilities as transgender students due to religious reasons, and that her feelings should trump the law.

Sigourney and her mother have been fighting hard to get her school, Emmaus High School in Eastern Penn, to ban transgender people from using bathroom and changing facilities, despite the fact that there are no actual transgender students in the same class as Sigourney.

Speaking on Monday evening at a school board meeting the young woman said, 'I am a woman, and I identify as a woman, and you can't make me change in front  of someone who I don;t identify with who is physically male.'

She went on to say that because transgender students are allowed to use the same facilities as her (again, despite not having any trans students in her own class) she feels that she must sit out of gym class, a choice that will result in her failing gym and ultimately High School.  She is claiming that this is somehow her being discriminated against.

'I feel nothing against transgenders, I would just not like their rights to overrule mine.'  She spoke out, somehow equating equal rights to a marginalised group having more rights than she does in some warped view on reality where not being privileged means being discriminated against.

'Gym requires us to participate to pass high school and if I don't change I'm not allowed to participate.  So my options are to let myself be discriminated against or fail gym for not participating and not pass through high school, which would jeapardise my future.'

Sigourney's mother, Aryn Coyle, shares the same extreme views on the situation and has been actively supporting and encouraging her daughter, going so far as to likening the fight to discriminate against transgender students as a 'battle' on her Facebook account.

Aryn has tried to write tot he school to have them allow Sigourney to be excluded from the class due to religious reasons, however, the school principal responded to her to say that 'religious exemption from class only applies in health class due to sexuality content and not gym class'.

'I have always been an advocate of any special arrangement that prevents any group of people from being mistreated based on who they are.'  Aryn wrote on social media, blissfully unaware of how contradictory that statement is to her actions and just how bigoted she actually is.  'But I will NOT stand by while the law dictates that male bodies are allowed to walk into my daughters locker room, undress next to her, and shower alongside her.  Whether or not the male bodies are covered in pants or skirts is irrelevant.  They have no place in her locker room.'

Aryn has said that she is proud of her daughters bigotry, and that she will stand by her even if her selfish hate leads her to fail high school for wanting transgender students to be discriminated against.  Again, just to make this clear, there are no transgender students involved in this case at all, Sigourney Coyle has no transgender classmates, she just wants her religion to trump any potential real people.

Connect with Amy on LinkedIn
Join Her Fans on Facebook
Posted by Amy Walker at 13:17