The Calculations of Rational Men by Daniel Godfrey - Book Review 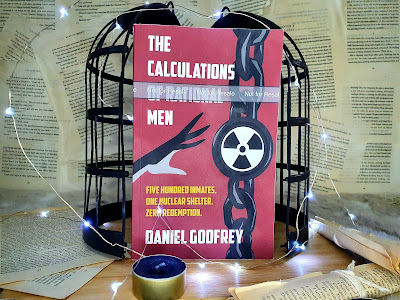 'THE UNITED KINGDOM AND HER ALLIES HAVE BEEN TARGETED IN A WIDESPREAD NUCLEAR ATTACK.

'December, 1962. Just months after the Cuban Missile Crisis, the five hundred men of HMP Queen’s Bench have found themselves in the midst of a new thermonuclear nightmare.

'WE DO NOT KNOW THE STATUS OF OUR TOWNS AND CITIES. WE SHALL NOT KNOW THEIR FATE FOR SEVERAL DAYS

'Prisoners, wardens and soldiers must now work together to forge a new future, even if some inside the shelter can only think of how to turn the situation to their personal advantage.

'RADIOACTIVE FALLOUT WILL PRESENT THE GREATEST RISK TO HEALTH. MEDICAL STAFF AND SUPPLIES ARE AVAILABLE.

'Caught in the very centre of the power struggles is Dr Joseph Marr. Just days into serving a life sentence for murder, he is given the responsibility for the health of all the men of HMP Queen’s Bench. But the question for him now is: how does he ensure those in the shelter survive?'

I was offered a copy of The Calculations of Rational Men by Daniel Godfrey after reviewing one of his previous books, The Synapse Sequence, back in 2018, and having been remembered by an author and asked to review his new work felt kind of intimidating if I'm being honest. I was a little worried, what would happen if I didn't like this book after the author had come to me himself? But as soon as I started reading The Calculations of Rational Men that worry went away. Barely a few pages into the book I was hooked, and come the end of the first chapter I knew that this was going to be something special.

The book tells the story of Dr Joseph Marr, a man who has recently been sent to prison for murder. He claims that he's innocent of his crimes; and when you hear the description of the events it does seem like a case of an innocent man sent to prison because society at the time didn't understand, and their outdated morals and ethics prevented them from understanding the truth. But, it doesn't really matter if he's innocent or not, he's a prisoner just like everyone else now.

Barely settling into his new life as a prisoner of HMP Queen's Bench, Marr and every other prisoner is pulled from their cells in the middle of the night and assembled in the prison yard. Warning has come that the Soviets have launched a missile, that the much fear nuclear war that people have been obsessing over for years has finally come. The inhabitants of HMP Queen's Bench feel the impact, the windows of the prison blowing outwards. They know that the end has come. Luckily, there's been a plan put into place for such an event, and they're all shepherded into a specially made bunker beneath the prison.

With a small contingent of guards and soldiers to watch over them, five hundred prisoners are locked away into several cramped rooms and told to wait, wait until it's safe to return to the surface. When Marr is pulled out of his bunk to join the people in charge he learns that they're without a doctor, and that as the only man there with medical training it now falls to him to help keep them alive. But with prisoners on the edge of violence, over worked and over tired staff, people who hate him on both sides, and dangers with supplies, Marr realises that not everyone may make it out of this alive, and that surviving the bomb was perhaps the easiest part.

The Calculations of Rational Men is an incredibly tense book. As soon as the bomb drops and the chaos begins there's never really a moment in the book where it feels like you can relax; there's always some danger looming, some new issue to worry about, some new circumstance pushing the survivors closer to breaking point. And the result of this is a book that is incredibly hard to put down. I was at first a bit intimidated by the size of the book, it being a hefty 450 pages; but after reading it in two sittings I came away thinking that it wasn't big enough, and that I wanted more.

Godfrey has produced a hugely engaging story that grabs you early on and just doesn't let go. Every small issue that happens in the bunker is something that feels like it can be the end of the world, not having enough toilet paper might not seem too bad, until Marr raises the concern that it could lead to disease. So when something that small has life and death repercussions moments when you've got irradiated people banging on the hatch trying to be let in, or the stirrings of inmate violence things almost become too much. The level of tension is racked so high that as soon as the next problem comes along you're almost groaning out loud because you just want a moment of calm.

Surprisingly, Godfrey gives readers a moment of calm part way through the novel, when a new narrative is introduced. Moving away from the 1960's, we meet a woman in the present day, Enola Thompson, whose mother has just passed away. Having grown up with a mother who is obsessed with the dangers of nuclear war, she's become afraid of leaving the area near her mothers home where her shelter is. At first this feels like a natural thing, especially as this is a world where the UK was hit with nuclear bombs decades before. However, as more details become clear it starts to make little sense, as the events in the present don't quite line up with those in the 60's. More mystery is introduced when Enola finds records about her grandparents that lead to secrets people are willing to kill to protect; and the answers will change everything you've read up to that point.

Godfrey has written a novel that was easily one of the most enjoyable narratives I've read this year. I became so engrossed in the book that I had to keep reading, had to see what was coming next, and had to get to the end. The characters were fascinating people with complexities and layers that you wouldn't expect, and there are times where you're not sure whether the people you're rooting for are people that you should be. It's a complex and twisting story that goes in unexpected places, and uses one of the worst case scenarios to ask questions about what people would do if they thought the end of the world had come.

The Calculations of Rational Men is one of my favourite books of the year, one that I will very quickly recommend to people, and that you should all definitely try out.