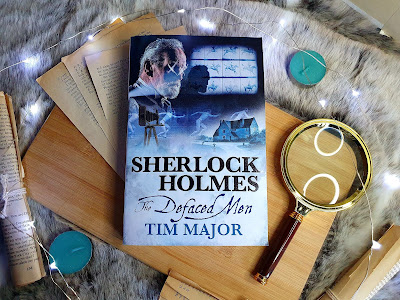 'Sherlock Holmes delves into the world of early cinema as motion picture ground-breaker Eadweard Muybridge begs him to solve a mystery that will keep you up all night... It is 1896. A new client at Baker Street claims he's being threatened via the new art of the moving image... Eadweard Muybridge, pioneer of motion picture projection, believes his life is in danger.

'Twice he has been almost run down in the street by the same mysterious carriage, and moreover, disturbing alterations have been made to his lecture slides. These are closely guarded, yet just before each lecture an unknown hand has defaced images depicting Muybridge himself, which he has discovered, to his horror, only as he projects them to his audience. As Holmes and Watson investigate, a bewildering trail of clues only deepens the mystery, and meanwhile, newspaper speculation reaches fever pitch. The great detective's reputation is on the line, and may be ruined for good unless he can pick apart a mystery centred the capturing, for the first time, of figures in motion, and the wonders of the new cinematograph.'

When I spoke to Tim Major following the release of his previous Sherlock Holmes book, The Back-T0-Front Murder, he hinted at both another Holmes book to come, and a part of what the story would be about, film. and thus, after a long wait that book is finally here in the form of The New Adventures of Sherlock Holmes: The Defaced Men.

This adventure begins as all decent Sherlock Holmes stories does, with a client coming to call upon the detective and his partner in their home at 221B Baker Street. Whilst most people coming to ask for help from the worlds greatest detective come with a story this client, Eadweard Muybridge, comes with something of a visual presentation. Muybridge is an expert in film cinematography, using the fairly new technology as an aid for studying anatomy, and answering academic questions.

During his recent tour he's been using his photographic plates to show off his findings to his audiences; but in his latest show something usual happened. Muybridge projects the plate for Holmes and Watson to reveal footage of himself that has been defaced, with his face scratched out, and the words R.I.P. above him. Muybridge also tells them that someone recently tried to hit him with a cab, and that he's now begun to fear for his life.

Intrigued by the case, Holmes agrees to take it on, and at the next show on Muybridge's tour some more unusual events happen, and another defaced plate is revealed to the audience. As Holmes begins to investigate the case his journey takes him to a house fire that claimed the life of a man; but how is it connected to Muybridge?

The central mystery of The Defaced Men feels like it should be a simple one. Someone is gaining access to the slides before they're projected and is making alterations to them. It feels like the kind of case that Holmes should have wrapped up pretty quickly. But as the book goes on it becomes clear that there's a lot more going on than first appears, and that threats and extortion are far from the worst crime being committed.

I loved the way that Major was able to take a simple set-up and spin it out into something much bigger and complex in a way that didn't feel like it was being forced, or where certain reveals and revelations were so strange that they derailed the plot. Whilst where the book ends up is very different from how it starts it feels like a natural conclusion, and that these incidents could very clearly lead into each other.

It's clear that Tim Major did a lot of research for this book, particularly into the realm of early cinematic techniques. Film is one of those areas where I had no idea what the early technology was like, or how it evolved; so getting to see some of that here, getting to learn how these early techniques were employed and how they were developed was hugely interesting.

One of the things that I liked about the book was how well Major managed to capture the characters voices. Holmes can sometimes be a hard character for folks to get right, and can on occasion be made too aloof, or too rude; but here he feels like a decent, natural Holmes that's very much in line with the Conan Doyle original. Watson is done similarly well, and there are a few moments with the character that elicit a chuckle or two because Major has managed to make him charming and funny without resorting into making him a buffoon.

The new characters are also very well crafted, and Muybridge is one of those characters who you end up kind of disliking very quickly. He's not a bad person, and is very much a target of a criminal mind, but there are times where he comes across, for lack of a better term, as a dick. He needs Holmes' help but is still kind of rude, kind of annoying. It's nice to have a 'victim' in one of these stories that isn't someone who's a shrinking violet, or who's so desperate that they're at the end of their rope. Holmes is there to help him but he's still kind of the worst, and I really liked that.

The New Adventures of Sherlock Holmes: The Defaced Men is an interesting new mystery story that introduces something new that the detective hasn't really had to deal with in his adventures before. It has decent depictions of the characters, and a plot that will keep you guessing throughout.