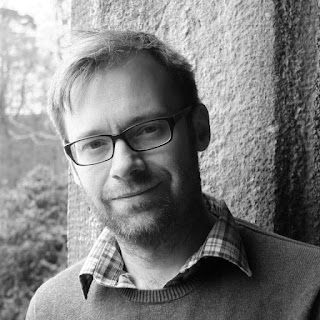 After reading through the latest Sherlock Holmes release from Titan Books, The New Adventures of Sherlock Holmes: The Back-To-Front Murder, I sat down for a chat with the author, Tim Major. My review for the book can be found here.

What’s the process like going about writing a Sherlock Holmes book for Titan? They produce a lot of Sherlock Holmes stories from a number of authors, so was this this something that they approached you about, or did you have to pitch it to them?

I was asked by the Titan commissioning editors whether I’d be keen to come up with story ideas for Sherlock Holmes novels. At first I was daunted, as I’ve never worked with another author’s world and characters before – and Sherlock Holmes is up there with Doctor Who in terms of ‘holy grail’ writing gigs, for me. All the same, I couldn’t help but think about ideas, and in the end I worked up two full synopses, both of which were accepted. My recent projects have all had mystery plots to some degree, so I’ve been getting fairly comfortable developing narratives relying upon clues being seeded throughout, and I spent a lot of time rereading my favourite Holmes stories to better understand the sorts of plot mechanisms Conan Doyle used. It was only when I began drafting The Back to Front Murder that I had a block – capturing the tone of Conan Doyle’s prose seemed a far more difficult test than inventing plots. I read non-Holmesian Conan Doyle works to absorb something of his writing style without being distracted with the content of the Holmes stories. Eventually I managed to trick myself, telling myself that the actual tone I needed to locate was Watson’s voice – because of course he’s the author and narrator of all of the Sherlock Holmes tales – rather than slavishly copying Conan Doyle’s writing tics.

Your story is structured very differently from a lot of other mystery stories, was it a challenge to create a narrative mystery that was, as the book describes, back-to-front?

Despite the clear reference in the title, I haven’t really thought much about this aspect, in terms of it being unusual. I suppose I have an aversion to the straightest means of telling a story – in terms of my own reading and viewing tastes, I’m drawn to twists on tropes or narrative tricks. One novel that was a big influence on mine was A Suspension of Mercy by Patricia Highsmith, in which a mystery writer imagines killing his wife, but then she goes missing and suspicion falls upon him, amplified by his sense of guilt. In The Back to Front Murder, the stakes are raised immediately as a murder has definitely occurred, in circumstances almost precisely as described in the notes of a mystery writer, so naturally the writer suspects that a copycat has been inspired by her dark thoughts. You’re right to describe this setup as a challenge, given that there are initially no suspects in the case at all, but it was a very satisfying puzzle to solve – and of course like most writers I work ‘back to front’ anyway, in order to present information in a sensible manner to lead to a conclusion that’s already known before beginning the first draft.

What kind of research did you have to do for the book, did you have to look into what paintings were in the Tate Gallery at the time the book was set, or did you have some artistic license to put whatever you wanted in there?

I wrote the novel during the first Covid lockdown, so while I would have enjoyed a trip to the Tate – or anywhere else beyond my own house, frankly – it wasn’t to be! I did work hard to determine the room layout of the Tate when it first opened, and to figure out which paintings might have been there by researching acquisition dates. I took some liberties, all of which I confess to in the acknowledgements of the novel, but in general I think there’s good sense to the paintings I chose, and the reasons for them being included. I spent a huge amount of time browsing old maps of London on the internet – the National Library of Scotland has a terrific online resource where maps of different eras can be overlaid. The plot of my novel involves Holmes and his client, Abigail Moone, re-enacting the movements of the murder victim, so it was important that the journeys and timings were plausible. 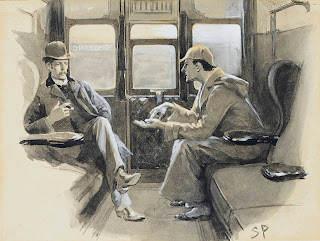 Your story seems to challenge Watson in a way I’d not seen before, with him becoming nervous that someone could try to replace him as Holmes’ assistant and chronicler. Did you find this to be a fun new avenue to explore his character?

This was one of the biggest draws when I was pitching Sherlock Holmes novel ideas. Watson is one of my favourite narrators in fiction, but in some sequences of the original tales he’s reduced to being a ‘camera’ solely dedicated to watching Holmes. I enjoy writing strong narratorial voices, and I was interested in foregrounding him. Including a successful mystery writer as the client allowed me to examine Watson as an author, a subject that goes relatively unexplored in the Holmes stories, other than Holmes complaining about his sensationalist style. One other factor is that my novel is a great deal longer than any other single Sherlock Holmes work (the longest of the novels is The Hound of the Baskervilles, which is 10,000 words shorter than my book) – spending more time exploring characters seemed a sensible way of using the available word count.

Your story features a particularly strong female character in Abigail Moone, a woman who’s similar to both Holmes and Watson in some ways. This was often something that didn’t feature in Arthur Conan Doyle’s original stories often, did you include it to allow you more ways to challenge the characters?

Absolutely, yes! Everybody’s aware that there are few strong women in the Sherlock Holmes canon – a great deal is made of Irene Adler, who appears in only one story, though of course her character has often been made more substantial in adaptations. I mentioned Patricia Highsmith earlier as an influence, and Abigail Moone is explicitly based on her – and of course that arrogance, non-conformism and independence would have stood out far more in the 1890s than the 1950s. I think the exchanges between Abigail Moone and Watson were my favourite scenes to write, due to Watson being placed in a position in which we’d never usually see him.

What are some of your favourite Sherlock Holmes stories, and did any of them influence your writing in any way?

Having now written a Sherlock Holmes novel of my own, I’m terrified of being ‘caught out’ as a Holmes lightweight. That’s not to say I’m not a fan – I love the stories, as well as other Conan Doyle works such as his Professor Challenger stories – but my ability to retain plot details is pretty awful, whereas perhaps it ought to be encyclopaedic. Specific moments lodge in my mind rather than complete stories. I love ‘The Red-Headed League’ because of its topsy-turvy mystery, so that’s certainly an influence on the ‘back to front’ aspect of my book. I really like the sequences in The Hound of the Baskervilles in which Watson works alone, again due the bending of the usual ‘rules’ and structure. The novel The Valley of Fear isn’t much loved, but I’m a big fan of it, and I adopted a similar structure (which Conan Doyle described as ‘two parts and a coda’) for my novel.

What do you think it is about Sherlock Holmes that keeps the character going strong over a hundred years since he was first created?

Sticking with my theme, I wonder whether it’s actually Watson. Holmes is an amazing character, obviously, but it’s Watson’s adoration of him that brings the stories alive for me. I suspect that many of Holmes’s deductions would ‘land’ far less well if it wasn’t for Watson’s unfiltered amazement – he’s one of the best reader surrogates in fiction, for my money. For this reason, I think that no film or TV adaptation can ever truly capture the tone of the books, as Watson fulfils a less central role if he’s not the narrator.

Your other books with Titan have had either a supernatural element, like Hope Island, or have been sci-fi stories, Snakeskins, did it feel different to be writing a very down to earth book rooted in reality?

Not very different at all. I’ve really taken to writing mystery stories, and I think there’s a lot of similarities with a certain kind of SF – I suppose I’m referring to particularly British type of speculative fiction in which a single aspect of the world is changed, and everything else remains entirely familiar. Mystery plots involve constructing a single ‘trigger’ event and then the investigation has to emerge naturally from it. Maybe I’m wrong, and maybe the genres are actually very different as far as readers are concerned – but as a writer I find these types of setups similarly satisfying.

Was the process of writing the book an enjoyable one, and would you want to create more Sherlock Holmes stories in the future?

I’m writing one right now! As I mentioned earlier, Titan actually commissioned two novels from me at once, and the second one will be published in August 2022. It’s centred around a cultural phenomenon that was emerging at the peak of Sherlock Holmes’s career, but which doesn’t appear in the canon: film. I’m having terrific fun with this one and I’m enormously grateful to have been given two chances to write about Holmes and Watson. I don’t suppose I’ll be lucky enough to be allowed write more Holmes novels, but I know I’d jump at the chance.

What projects can we look forward to seeing from you in the future?

The second, as-yet-untitled, Holmes book will be my next novel, but there will be a novella in the interim – it hasn’t been announced yet, so I can’t really say anything about it. I have another novel on the go, which I’m really excited about, but it’s a secret too! Sorry to be so vague. One thing I can say is that it will tie up the genre threads of my work to date, as it’s both a speculative novel and a mystery – as was my recently-published novella, Universal Language, a locked-room murder mystery set in a dilapidated Mars colony.

Anyone interested in seeing more of Tim Major's work can head over to his website to find more.