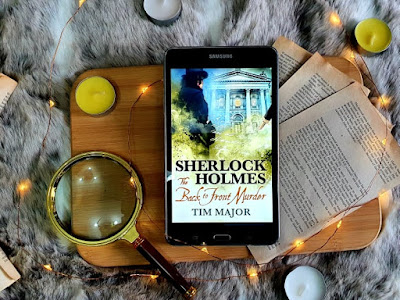 'May 1898: Sherlock Holmes investigates a murder stolen from a writer’s research.

'Abigail Moone presents an unusual problem at Baker Street. She is a writer of mystery stories under a male pseudonym, and gets her ideas following real people and imagining how she might kill them and get away with it. It’s made her very successful, until her latest “victim” dies, apparently of the poison method she meticulously planned in her notebook. Abigail insists she is not responsible, and that someone is trying to frame her for his death. With the evidence stacking up against her, she begs Holmes to prove her innocence…'

I'm always up for reading new Sherlock Holmes novels, I'm more than happy to see authors trying new things with the characters and taking the iconic detective into interesting places. When I saw that Tim Major was going to be bringing out an entry in The New Adventures of Sherlock Holmes series it got my attention pretty quick. Having previously read his other work, both Snakeskins and Hope Island, I was interested to see what he'd do with Holmes. His previous work were great character led pieces that took a lot of chances, and I was eager to see that same kind of energy brought to a character I love.

The story begins with Watson returning home to his Baker Street apartment to find a new client already there, seated in his own chair no less. The young woman, Ms Abigail Moone is an author who writes mystery novels under a male pseudonym; an author that Watson himself has enjoyed reading and whose books sit upon his shelf. It turns out that Abigail has come to the famous detective and his trusty chronicler because she believes she may have helped to kill a man.

She explains to the two that in her research for her next novel she came across an interesting looking man who visited the Tate Gallery every day, a man who piqued her interest during her regular people watching sessions. After following the man and learning his routine for a few days she came up with a hypothetical way to murder him, as a kind of mental exercise to help her with her mystery stories. However, when the man suddenly drops dead, killed in the same way she came up with, she believes that she may have inspired an actual murder.

Intrigued by the unusual nat`ure of the case Holmes and Watson agree to get to the bottom of things, but this means that they're working on a case in a way that they've never done before, one that's going to require them to have to broaden their approach and come at things back-to-front.

Major takes a very different approach to his Sherlock Holmes story than a lot of other writers, and as such I found that the mystery really tested me (and Holmes and Watson too). Instead of the standard murder mystery set up of someone having been killed and there being a number of suspects in this book there are none. The mystery starts with the detectives knowing how the murder was done, but not why, and with no possible suspects. The book very much earns its name.

Because of the strange nature of the case there is a lot of backwards and forwards as Holmes and Watson try to find any kind of clue as to what could have happened to this man and who could have killed him. There are a number of interesting ideas put forward, and there are clues given early on that do point towards the answers, but with so many theories and so little information I think even the most experienced mystery reader will be left scratching their head.

What Major does give readers, however, is some interesting character moments; especially with regards to Abigail Moone. She's probably the most interesting character in the book, and whilst Major does write Holmes and Watson well I do think it's Moone who gets the most room to shine. She's an independent young woman, one who isn't afraid to go against society's expectations of her and do her own thing. Watson has always been someone who gets somewhat flustered by women, but seeing him thrown as much as he is by Abigail during the course of the book is quite a lot of fun.

She's very similar to Holmes in a lot of ways, and I think her deductive mind, her independent attitude, and her desire to do her own thing instead of what people might expect of her probably grates against Watson because he sees a lot of his friend in her. There are moments in the book where Watson is worried that Abigail is angling to replace him as Holmes' partner and chronicler, and I really liked seeing this kind of insecurity in him as it's not something that you get to see all that often.

Another thing that I really enjoyed about the book was something that Arthur Conan Doyle himself has done in a Holmes story, but I've not really seen done very often. Towards the end of the book, as we're learning the important details as to why this man has been killed we get several chapters that follow him in his past, delving into his backstory and seeing the events that led him to this point. This reminded me a lot of the first Holmes story, A Study In Scarlet, and how that book had a large section that were set in the US as we learnt the backstory of Jefferson Hope and Lucy. The later sections of this book felt a lot like that, and it was an interesting way to bring the readers up to speed on things in a different way.

Overall I really enjoyed this book, and found it to be an interesting take on Sherlock Holmes. It didn't do anything drastic to change the characters or the setting, and could very much have slotted into the original stories that Arthur Conan Doyle created, but because of how it presented the mystery it felt fresh and different in a very unique way. A great addition to my Sherlock Holmes collection.