The Raiders of Bloodwood: A Descent Legends of the Dark Novel by Davide Mana - Book Review 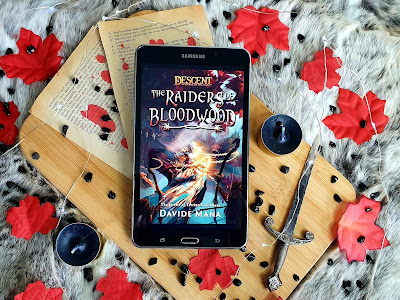 'A handful of heroes stand between a monstrous horde and the destruction of the mystical heart of Terrinoth, in this nonstop fantasy novel from the world of Descent: Legends of the Dark

'The invasion of Terrinoth has begun. Brutal Uthuk Y’llan hordes swarm across the land, ravaging everything in their path. A great champion has arisen in the Darklands: Beastmaster Th’Uk Tar, bent on destroying the wild and mystical Bloodwood as his first step in conquering the great forests of the Aymhelin and annihilating the elves who call it home. If the Amyhelin burns, so will Terrinoth. Trapped between his army and the forest are a misfit band of elven, orcish, catfolk, and human refugees. To repel the murderous Beastmaster, they must overcome their differences, embrace their skills, and learn the secrets of the Bloodwood. They are the realm’s only hope.'

Before reading this novel my only experience with Descent Legends of the Dark was the recently released Zachareth book. I was given a taste of this fantasy world, and the kinds of people and creatures that inhabited it, but The Raiders of Bloodwood really expanded that into new, exciting directions as Davide Mana introduced a lot of new things.

The story begins as all dire fantasy stories do, with the forces of darkness having risen to threaten the world. In this case, it's in the form of the vicious Uthuk Y'llan, a horde of monstrous people who have begun to slaughter their way cross the land of Terrinoth. Many have been killed, and those that want to survive have had to flee their homes and lives in order to escape the oncoming threat.

We meet our main group of 'heroes' as part of a refugee caravan, trying to reach what they hope will be the safety of a walled city before the Uthuk Y'llan can catch up with them. The half catfolk, Brixida, is fleeing the home she's been working in as a governess for a rich family, travelling with the family and their closest servants in their carriage. One of these servants is the elderly human scholar Arnost Emery, the children's teacher. The two of them get on well enough, but it's in seeing the casual cruelty of their employers when the carriage breaks own and they abandon them, that really brings the two of them together.

Left on the side of the road, Brix and Emery end up befriending Grimald of Guyot, a merchant forced to pack up what he could salvage from his shop into a small cart. Travelling together along the road, the three of them hep to defend each other when the caravan comes under attack from a group of Uthuk Y'llan raiders. Luckily, they receive some aid in the form of a militiaman orc named Tharadax Tanner, and a mysterious elven ranger called Laurel. After the attack is repelled the survivors agree to continue on along the road to what they hope will be safety; but not everyone thinks its a good idea. Brix, Emery, Grim, and Tanner, decide to go with Lauurel, who's heading to the elven controlled Bloodwood. But little to they know that a vicious Uthuk Y'llan warlord and his small army are heading the same way, and that this small, motley band of survivors will find themselves all that stands between him and total destruction.

The Raiders of Bloodwood is a story that doesn't feel like your normal tale about a group of heroes fighting to stop some kind of apocalypse. The group of heroes for this story aren't warriors for the most part. One of them is a highly trained warrior, yes, but the others are fairly normal people. They have a smattering of training in their pasts, or sometimes none at all, and have simply found themselves thrown into this situation beyond their control. And this makes for a really engaging story. These aren't big, heroic archetypes, they're tired old men, and young women grappling with the pressures her parents put on her. Before this they had normal jobs, and worried about getting their next meal.

The central group of The Raiders of Bloodwood are a lovely bunch though, and the fact that they're mostly just normal people makes their interactions and their journey the real highlight of the story. The small moments when they're travelling together, telling stories around the campfire at night, or helping each other down a steep hill without falling down, make for some of the best moments. Mana gives you a chance to get to know them, to see them as regular people so that you come to like them and care about them; and so that you begin to worry about them when their lives come into danger.

And there is a lot of danger in this book. There's a constant looming threat hanging over our heroes the entire book, and you never really feel that they're safe. There are a few times where you think that they've reached a place that should be safe, where the horde have already been, or where you believe they couldn't possibly reach, so you begin to let your guard down; but these are the moments when it's its most dangerous. When the characters begin to let their guard down is when the worst happens, and they end up fighting for their lives. Mana does a fantastic job at never letting you feel like you can take it easy, or expect safety, but never lets it feel too oppressive or tense.

When things do go badly though, our heroes have to take up arms and defend themselves; and the action scenes are very well done. The descriptions of what's happening are always clear and precise, allowing you to keep track of where everyone is and what's happening. And there are a fair few moments where you find yourself holding your breath for a moment because you become so sucked in to what's happening that you're on the edge of your seat.

The Raiders of Bloodwood has a lot in it to enjoy. Whether you're looking for big, epic fantasy action, scary monsters, awe inspiring sight, or fun, character driven moments, they're all here in spades. It's a book that has a lot of offer, and that can be picked up and enjoyed by someone completely new to the franchise, or a long time fan.