The Head of Mimir by Richard Lee Byers - Book Review 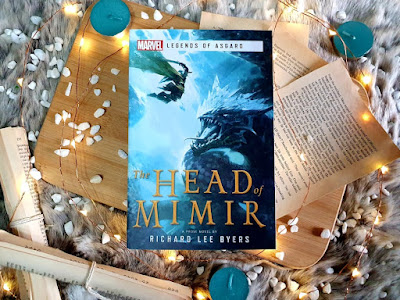 'Before Heimdall became guardian of the Bifrost he was just another warrior, until he turned rogue to save all of Asgard… in this heroic fantasy novel set in Marvel’s incredible Legends of Asgard

'It is a dark time for Asgard. The Allfather is trapped in a bewitched Odinsleep, inspiring an all-out assault from the Frost Giants. They evade the gods’ defences with uncommon ease, as if guided by augury. Heimdall, a quick-witted young warrior still finding his place, believes it no coincidence that Odin lies enchanted and that the Giants are so well-informed. Breaking into Odin’s chambers, he discovers that the severed head of Mimir – a great source of wisdom – is missing. Accompanied by his sister, Sif, Heimdall must quest across the Nine Worlds to retrieve it, and defeat those besieging his home.'

The world of Marvel's Thor is an interesting one, one that manages to mix together super heroics, Norse mythology, and in later years, science fiction. The recent big screen adaptations have very much pushed the sci-fi angle, which I've enjoyed, but the downside of this is that viewers got very little fantasy with their Thor. The Head of Mimir, in contrast, has very much embraced the mythology behind the original comics, and has provided readers with a high fantasy adventure that's sure to thrill.

The story is bookended with Volstagg, one of the Warriors Three, telling his son a story about Heimdall in order to teach him that a warrior is more than a strong sword arm, and that being smart enough to take a step back and think things through is perhaps even more important than martial skill. His story takes readers back through time, to a place long before the events of the Thor comics, where Heimdall and his sister Sif were just regular soldiers in the Asgard army during a war with the Frost Giants of Jotunheim.

The war is not going well for the people of Asgard. Odin has been in the Odin-Sleep for weeks, longer than ever before; and without his wisdom and power the forces of Jotunheim have been encroaching further and further into the kingdom of the gods. The Frost Giants have been using more and more cunning tactics than ever before, and are simply overwhelming Asgards forces. Looking at what's happening, Heimdall is convinced that something more must be at work here, that Odin being away for so long must be a sign of something awful going on behind the scenes.

Approaching Queen Frigga, he implores her to enter Odin's chambers and make sure that something awful hasn't been done to the king. Under the advice of court enchantress Amora, the queen dismisses Heimdall's concerns; which prompts the young soldier to take matters into his own hands. Sneaking into the Odin-Sleep chambers, he and his sister must overcome the magical defences and illusions within before coming face to face with their king. Unable to see anything wrong with him, they do notice that someone must have entered before them, as the magical Head of Mimir has been stolen.

Knowing that this magical artefact is able to dispense amazing advice and knowledge Heimdall concludes that a traitor must have sent the head to the Frost Giants, explaining their change of tactics. Unfortunately, entering Odin's chambers is high treason, and when he and Sif are seen leaving they must go on the run from their own people, setting off on a mission to retrieve the head whilst being hunted by Asgard too.

The Head of Mimir is a hell of a story, more in line with the epics of legend than anything I've read in the Thor comics, but it fits so well with the universe and characters that Marvel have adapted over the decades. Richard Lee Byers clearly know not just the world of the comics, but the original myths too, and manages to weave them together in great ways. And one of the things I liked the most, there was never a sense that he was trying to make it feel like science was at work here. Unlike the films, which tried to explain magic away as advanced science, this book embraces its fantasy roots and says 'no, this is magic'. People cast spells, monsters from myth wield powers, and the world tree exists.

I adored this decision. I never like it when writers try to make magic feel less special, when they try to make it feel practical and real. Give me Frost Giants with ice staffs casting spells on battlefields, giant dragons scaling the sides of a magical tree that holds different worlds in its branches, and teleporting Pegasuses over that. Let me feel awed and in wonder, rather than waiting for a scientific explanation for things. It's so nice to have a book that embraces the fantastic and presents them without feeling like it has to give reason or make it understandable. It makes the journey that the two heroes go on feel so much bigger and more amazing.

Heimdall and Sif make for some excellent protagonists too, and their relationship is explored well throughout the book. I have to admit, before reading this I never knew that the two of them were siblings, and to have that relationship not just included, but made central to their story, is great. We see two soldiers who keep fighting for each other, who refuse to give in or leave the other behind because they're not just brother in arms, but family. There are a few occasions in the book where lesser relationships would have really been put to the test, where lesser characters would have broken apart, but the two of them never give up on each other.

The focus on their relationship also gives some stakes to the book. These are characters that we know from the comics, we know that they don't die here, that they go on to bigger positions in Asgardian society. So instead of having to worry if they'll die or not the concern shifts to their relationship. Will the two of them end up falling out? Will events push them to the point of hating each other, even if only temporarily?

The Head of Mimir wasn't what I was expecting going into the book, but it was such a pleasant surprise. In a time where comic heroes revolve around science and realism it's so good to get a story that embraces the fantastical, that doesn't feel the need to be gritty and true to life, but is content to be wondrous and over the top. Comic book fans will love seeing more about the kingdom of Asgard and learning more about some of it's inhabitants, and fantasy fans will feel right at home here too, even if it's their first time trying out the Marvel universe.