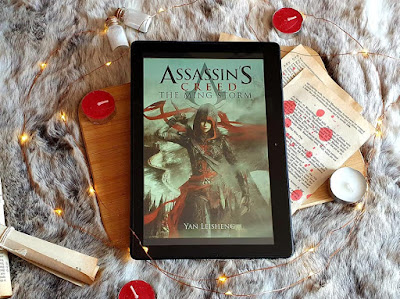 'The Ming dynasty becomes a battleground for the Brotherhood of Assassins and the Order of the Templars in this blockbuster action novel from a previously unexplored part of the beloved Assassin’s Creed universe.

'China, 16th century. The Assassins are gone. Zhang Yong, the relentless leader of the Eight Tigers, took advantage of the emperor's death to eliminate all his opponents, and now the Templars hold all the power. Shao Jun, the last representative of her clan, barely escapes death and has no choice but to flee her homeland. Vowing to avenge her former brothers in arms, she travels to Europe to train with the legendary Ezio Auditore. When she returns to the Middle Kingdom, her saber and her determination alone will not be enough to eliminate Zhang Yong: she will have to surround herself with allies and walk in the shadows to defeat the Eight Tigers.'

I enjoy the Assassin's Creed series, despite having really fallen behind in the games. I've played several, and those that I have played I've really enjoyed, especially Assassin's Creed: Syndicate (seriously, set anything in Victorian era London I'm going to fall in love with it). But, I've not really experienced all that this ever expanding universe has to offer, so when I saw that Aconyte Books were going to be bringing out a novel set in this universe I was very, very excited.

Assassin's Creed: The Ming Storm follows the events of the side scrolling spin-off game Assassin's Creed Chronicles: China, and sees the assassin Shao Jun returning to her homeland after spending time learning from master assassin Ezio Auditore following the destruction of her brotherhood. Having been taught by the best assassin in the world Shao Jun feels that she's finally ready to take on the members of the Eight Tigers, a group of eunuchs that control the Chinese imperial court.

I'm actually quite glad that I haven't played this game, as it means that I get to come to the book completely fresh, without any preconceptions of what to expect. Though I do expect that there will be moments in this book that directly reference parts of the game, and those will be completely lost on me. However, the book very much feels like a regular novel, and there were never any times where anything felt odd or out of place, like Yan Leisheng was having to put something in just because it was in the game.

Instead of feeling like an adaptation, books that sometimes struggle to have their own voice, or where the parts of the story that the author has added feel tonally very different from those in the original material, Assassin's Creed: The Ming Storm felt like a cohesive and tonally unique book. If I didn't know it was telling the story of the game I'd have believed it was a completely original new story within that universe.

I was also very impressed that Aconyte employed a Chinese author to work on the book. I know this might seem like a really obvious thing to do, but not every publisher would think to do that. Not only does this decision show a great deal of respect on the publisher's part, but it also makes the book feel very different. You can always tell when an author knows the subjects that they're writing about, and when people are writing about places and people that they know over things they've simply researched.

Yan Leisheng wrote in a way I wasn't expecting too, and it took me a while to learn his writing style. This was partially down to myself, and the fact that I was expecting the book to have a certain pace and tone because of the source material it's based upon. I was expecting the novel to move quickly, to be full of action, and to have faced paced dialogue. Instead, it's a book that takes it's time. It spends a good deal of its text going into depth about the people and places, and making sure the reader has a good understanding of things. There are sometimes moments where Leicheng will spend a page or two giving you detail about the history of a person in the middle of dialogue, where the response to what they've just said takes a page or two to come because of the details we're being given.

I'm not sure if this is a cultural thing or not, whether it's a writing style that's more favoured by Chinese authors like Leisheng, or if it's his own personal style. Either way, it made the book a very different type of experience, though if I had to compare his style to another author I'd have to say it reads like Stephen King. Much like King Leisheng goes into depth, provides heaps of context, and doesn't race towards a conclusion, instead allowing the reader to meander through this world he's creating.

Assassin's Creed: The Ming Storm might be based upon a video game, but it felt like a book that was purely its own creation. It's a book that cares more about crafting a living breathing world, filled with characters that have a lot of depth, who the readers can come to understand. Even if you're not normally interested in video game books, or even action books, I'd say it's worth reading because it's a lot more than either of those, and is a book that explores the history and culture of China with care and attention.