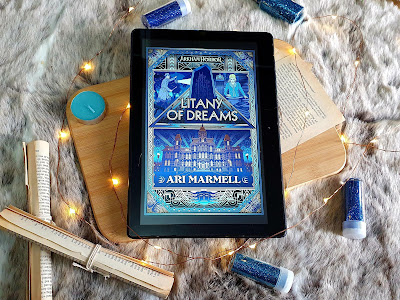 'Dark incantations expose the minds of Miskatonic University students to supernatural horrors, in this chilling mystery novel of Arkham Horror

'The mysterious disappearance of a gifted student at Miskatonic University spurs his troubled roommate, Elliot Raslo, into an investigation of his own. But Elliot already struggles against the maddening allure of a ceaseless chant that only he can hear… When Elliot’s search converges with that of a Greenland Inuk’s hunt for a stolen relic, they are left with yet more questions. Could there be a connection between Elliot’s litany and the broken stone stele covered in antediluvian writings that had obsessed his friend? Learning the answers will draw them into the heart of a devilish plot to rebirth an ancient horror.'

I've not played the Arkham Horror game, my only experience in this world is my knowledge of of Lovecraft's stories, and the only book in the series I've read so far, Arkham Horror: The Last Ritual. As such, when I began reading the latest release in the novel series, Arkham Horror: Litany of Dreams, I was expecting certain things; I was expecting shadowy cults, strange rituals, and mysterious relics. Whilst this book has all of these things, it also has a lot more going on in it; things that make this a definite stand-out read.

The story follows a group of people who are drawn together in the town of Arkham. There's Elliot Raslo, a young psychology student whose friend, Chester has recently disappeared. Daisy Walker, one of the librarians of the Miskatonic University, who's in charge of keeping some of the stranger and more dangerous books in the collection under lock and key. And Billy Shiwak, an Inuit who's travelled across the world to Arkham in search of a relic that was stolen from his people. At first glance there's not much to connect these three, until their separate investigations draw them together.

Our three investigators soon discover that Chester may not only have come into contact with Billy's relic, the Ujaraanni, but has found a connection between it and an ancient, mysterious monolith held deep in the bowels of the University. The three of them come to believe that Chester's investigation into these artefacts may have led directly to his disappearance, and as such Daisy and Elliot agree to help Billy try and find his missing artefact, hoping that it will also lead to Chester. Along the course of their investigation the trio will discover a seedy underbelly of Arkham that deals in the mysterious and the occult, as well as a small swamp community that has fallen victim to this strange curse; some kind of odd incantation, one that Elliot has been hearing in his head ever since Chester vanished.

One of the things that I loved about Litany of Dreams was how you never knew what to expect next. The story began with one of the Miskatonic professors searching for Chester, finding a frightening secret deep in the swamps, before the action then shifts back to the city. Here the mystery focused on our three principal players as they try to find the clues that can help them find Chester, before it takes us back to the small swamp community where something even more horrific is going on. Then the book brings you back to Arkham and introduces even more frightening stakes; ones that could mean the end of everything.

The twists and turns in the story meant that you had to be constantly on your toes. There was never a moment to feel relaxed reading the book, as there was always something happening. Even the moments of the book where there wasn't a lot of action the characters were always discovering new things, finding out secret histories or unearthing hidden connections between people. Ari Marmell never let the reader get bored, and paced the narrative wonderfully throughout.

One of the things that really stood out about the book for me though were the scenes set deep within the swamps. From reading the previous Arkham Horror novel I was expecting a story that would be mainly set within the city itself, focused on the hidden societies and cults that make up the town. So when the characters found themselves in this remote, rural location it made for a big shift in tone. The fact that the horror became more overt then too really helped. Instead of the ever present sense of unease the horror shifted and moved front and centre as people that had fallen under the spell of this strange litany became active threats.

These moments brought to mind things like Night of the Living Dead and Resident Evil 7, one because there's the horror of an infection that can turn your loved ones against you and force you to have to kill them, as well as the potential for it to linger inside you before transforming you into one of them too; and the other because of the remote setting where people are slowly changing into something else, with this outside presence controlling their actions and turning them on those they love. It was the part of the book that really got under my skin the most, and I absolutely loved it.

One of the keys to good horror though is having characters that you care about. If people start being killed off but they're folks you don't really give a damn about it doesn't really mean much; so having characters that you can get attached to is really important. Marmell seems to understand this, and gives readers some compelling characters to follow. Daisy is a young woman who's worked hard to get in the position she has, and seems to have something of an impostor syndrome going on. There are times in the book where she expresses amazement that she has the position she has, and seems to always be worried about something causing her to lose her job and standing. It's something I think a lot of us can identify with, and it means that when she refuses to get involved with certain things, or to put herself at risk in certain ways, you completely understand it. You get why she's worried to put her job on the line and you don't hold it against her.

Billy is probably the biggest outsider in the book, being a character who's not Caucasian he's almost instantly met with distrust, if not open hostility throughout the book. Even when there are times people seem to be accepting and polite towards him it can turn and you see that there's bigotry just beneath the surface. There's one scene in particular where someone uses the phrase Eskimo, Billy tells him that he doesn't like it and prefers the term Inuit, making it quite clear that the other word isn't acceptable; but then that person immediately replies with 'Yes, I've heard that about Eskimo's' and carries on. It's not overt, but it's there. And it's there constantly. The level of restraint that Billy shows throughout the book is astonishing, and it quickly gets you on his side and you see that despite sometimes appearing to be angry or upset about things he's a man in a lot of control of his emotions, one who keeps his actions measured and carefully thought through.

Elliot is one of the the more interesting members of our little group. At first he appears to be a pretty average young man, one who's given himself over to his studies and is trying to better himself. But we soon discover that he's willing to give up a lot of the advancement he's achieved in order to help his missing friend. There are heavy hints at why there is in the early stages of the book, and it's no real surprise when it's revealed that he's in love with Chester. Making him a queer man in a time where such things were unacceptable, where he has to hide his romantic feelings behind 'just good friends' makes his mission to find Chester and save him so much more meaningful and heartbreaking. Even if he's able to find Chester and get him back safely he can never be with him, can never openly love the person who means the most to him in the world. It's perhaps one of the more tragic parts of the book.

The fact that the three leads are all outsiders, people who aren't in positions of power, who aren't able to be themselves definitely works in the books favour. Not only does it give the text something interesting to explore, as much of Lovecraft's own work was about straight white cis men, but it also flips the themes of the 'horrific outsider' that was a foundation for the original Lovecraft stories on its head. We all know that Lovecraft was a huge racist, that he hated and feared anyone who was 'different' or 'other', so to have those kinds of people be the ones to be rising it all to save everyone else, to be putting their lives on the line to stop the true darkness is an absolutely sublime choice.

As I said before, this is only my second Arkham Horror book, but it's quickly become my favourite in the series; as well as one of the better Lovecraft inspired stories I've read. It takes the expected conventions and turns them on their head. The book always keeps you guessing, always keeps you on edge. I adored every minute of reading this book, and I really hope that we get more of Ari in this world.