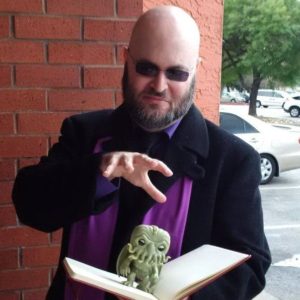 How did you first get into horror?

That’s... actually a really good question. I’m not entirely sure. As a kid, I was always into speculative fiction—sci-fi, fantasy, all that—but I didn’t much care for horror. In fact, I was pretty easily scared. I want to say it began to change in my teens, as I was exposed to more horror by my friends - Evil Dead and the like. But also, there are a number of fantasy authors who tend to work a lot of horrific imagery into their books. Simon Green is the first author I remember seeing that from, though I’m sure there were others, and I think that’s what really hooked me.

That and playing Vampire: the Masquerade a lot.

There’s a lot of stories in the Lovecraft catalogue, are there any that stick out to you as particularly memorable, or that helped to inspire Litany of Dreams?

I don’t think any of his specific stories inspired Litany, except possibly in the negative. (I’ll talk more about that in a bit.) As far as the ones that stand out... Well, at the risk of giving the boring answer, I’ll say mostly the famous ones/the classics. “The Call of Cthulhu.” “Pickman’s Model.” And of course “The Shadow Over Innsmouth.” (When I was doing a lot of role-playing game work for Wizards of the Coast, I wrote an entire D&D adventure heavily inspired by that one.)

What is it about Lovecraft’s work and the universe he created that you think makes it such an enduring thing?

Lovecraft is pretty close to synonymous with “cosmic horror,” and it’s a sub-genre that... I hesitate to give him full credit for creating it, just because I know he had his own influences and there were other writers of the time who might’ve technically come before him but who never achieved his fame. But he effectively created that sub-genre, and he certainly popularised it. He captured both a style of story and a certain variety of human fear that I think really resonate. It’s almost endlessly fascinating, and very different from other forms of horror.

The book had some really strong characters in it, and I loved how most of them were people who wouldn’t have been in positions of power at the time it was set, such as women, queer people, and people of colour. Was it a conscious decision to make your lead characters outsiders like that?

It very much was, not just for story purposes but—and I’m sure some people will roll their eyes at this, but whatever—also as a deliberate statement. It’s no secret that Lovecraft was deeply racist and xenophobic, even for his day. Unfortunately, you can find those attitudes in a lot of his work as well, sometimes just under the surface, sometimes pretty well on the surface. I very specifically wanted to flip the script, to focus on characters he never would have, to take someone he would have portrayed as a “savage” and instead make them the one on the journey of discovery and retrieval in the midst of an ethically questionable “civilised” society. (Had I not been writing for someone else’s IP, with an existing audience that includes younger readers, I’d actually have taken some elements of that, and of the horror, a lot farther. I don’t mention that as a complaint or anything—this is a great audience to write for and a great team to work with—merely a comment.)

It’s something I’d wanted to do for a while, for both the statement and for the almost limitless story potential, even before I ever got involved with Aconyte. I’m delighted they offered me the opportunity to do it.

Other books in the Arkham Horror series seem to focus on the elites of the city, with those in high society, but you chose average people for the most part. Were you ever tempted to set the book more in high society?

Not really, no. Pretty much as soon as the concept began coming together, I knew it was going to involve students and staff at Miskatonic, and an outsider to the city. It never felt like it wanted to be anything else.

Your story deals with a litany that gets inside people’s heads and infects them, changing them into essentially drones to a higher power, which was incredibly creepy. What inspired this idea of infection spread through sound, as it’s such a brilliant concept?

First, I need to be clear that I’m not the only person to play with the idea of “infection through sound.” There have been other stories that do so, albeit in very different ways.

I’ve long had a fascination with telling stories involving certain forms of body horror. What really made this click for me was the idea of combining those, and making them work in Lovecraft’s mythology. So it wasn’t a single specific idea that made me want to do this, so much as a confluence of several.

Hmm. I’d really like to go into this further, but I’m afraid there’s no way I can do so without some significant spoilers. So while I recognise I’ve only given a half-answer at best, I’m afraid I’m going to stop it there.

The book features an Inuit character in Billy Shiwak, was there a lot of research involved in including this character? I really liked the way that you made a point of showing how the word ‘Eskimo’ was a slur, and how much Billy hated the phrase.

A lot of research, yes. I knew from the start that it was going to be very tricky portraying such a character both accurately and respectfully. And I’ll admit straight up that a lot my initial research was incomplete—not for lack of trying, but just for lack of readily available detail. A huge amount of English writing on the culture of the Kalaallit (Greenlandic Inuit) is older and filtered through any number of problematic attitudes.

We knew from the beginning that we were going to need a sensitivity reader/fact checker. It was difficult finding one, but when we finally did, she was delightful to work with. She corrected a great many errors on my part and made my portrayal of the character so much better. (If any mistakes still slipped through, those are entirely my responsibility, not hers.)

If people enjoyed reading this book what can they hope to expect from you in the future? Are you able to tell us what you’re working on next?

If people enjoyed the setting, I’d recommend my Mick Oberon series. It’s fae-focused urban fantasy set in the 1930s, with a very period voice to it. Sam Spade meets Harry Dresden, sort of. It’s not horror, but some elements of the fantasy do get fairly dark on occasion.

At the moment, I’m working on a fantasy novel, a tie-in for an upcoming game called Bloodstone. My agent’s working on selling a near-future horror novel that makes this one look like My Little Pony. And I’ve got some people looking at some script-writing I’ve done. I’ll certainly be announcing it if anything comes of that, but you probably won’t need me to. I expect everyone within a few thousand miles to hear me screaming.

Anyone interested in seeing more of Ari's work can head over to his website to find more on his back catalogue, where they can also find out a little bit more about the author too.