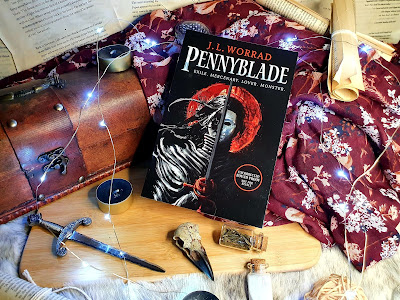 'Kyra Cal’Adra has spent the last four years on the Main, living in exile from her home, her people, her lover and her past. A highblood commrach—the ancient race of the Isle, dedicated to tradition and the perfection of the blood—she’s welcome among the humans of the Main only for the skill of her rapier, her preternatural bladework. They don't care which of the gleaming towers she came from, nor that her grandmother is matriarch of one of Corso’s most powerful families.

'But on the main, women loving women is a sin punishable by death. Kyra is haunted by the ghost of Shen, the love of her life, a lowblood servant woman whom Kyra left behind as she fled the Isle.

'When a simple contract goes awry, and her fellow pennyblades betray her, Kyra is set onto a collision course with her old life, and the age-old conflict between the Main and the Isle threatens to erupt once more.'

Often when fantasy stories involve elves they're portrayed as regal beings, ancient creatures whose society is so old and so wise that they look down upon humanity and see us as nothing more than savage children; it's the classic Tolkein elf. And whilst the elves in Pennyblade are ancient, are more advanced, and do look down upon humanity, we quickly learn that they are just as savage, just as decadent, and just as corrupt as us. And I absolutely loved it.

The story of Pennyblade is split across two different times, set a number of years apart, in a twisting narrative that follows Kyra Cal'Adra, a high born commrach. In the present day narrative Kyra is living on the mainland, the human territory. She's left her home to live on the road, travelling from one small town to the next putting her skills as a sword fighter to good use to become a pennyblade, a hired mercenary. We quickly learn that despite being good at her job she's hated by most of the people around her. People distrust her because she's a pennyblade, they hate her because she's not human, and they despise her because she loves women.

Kyra's been travelling with a small group of pennyblade's, taking work wherever they can find it; but when a simple mission to kill a man who's been coming to a small town, forcing the inhabitants to hand over women and girls to him for him to sleep with, goes wrong her life on the mainland is changed. Suddenly she's alone, unsure if she can trust anyone, and when she passes out from exhaustion running from an angry mob she wakes inside a local church. Unfortunately, the church didn't take her in out of the kindness of their heart. Instead, they plan to force Kyra to work for them. With no way to escape her captors, and with the threat of execution hanging over her head, Kyra's forced into even more danger.

Whilst reading this we also alternate between Kyra's past, to the time where she was still living on The Isle, the homeland of the commrach. Here we see a much different version of Kyra, where she lives a life of luxury with her twin brother Kyran as part of one of the ruling houses of their nation. Here Kyra is something of a spoilt brat, and she's trying to rage against a system that she's expected to be an active part of and uphold for future generations as her scheming grandmother attempts to plan out the futures of Kyra and Kyran. These chapters not only give us further insight into the commrach society, but also fills in the gaps explaining how Kyra ended up living on the mainland as an exiled mercenary.

One of the things that I absolutely loved about Pennyblade, something that I'd seen other people talking about before I got this book, is how awful so many of the characters are. J.L. Worrad doesn't seem to be concerned about creating a story where you'll instantly like the protagonist. You might go for the entire novel not even standing her; but what he does do is to create a group of characters that I adored in spite of the fact that they're all complete bastards.

The Kyra on the mainland is bitter, resentful, out only for herself, and is willing to screw over most of the people around her if it gets her ahead. Thrown into this is Sister Benadetta, a member of the Pilgrim's church who ensnares Kyra into working for her. She considers Kyra to be without a soul, she hates her for being a lesbian, and she uses her position to hurt people. There's also Shortleg, a mercenary who's a womaniser, a homophobe, and generally unlikable in every way; and Nail, a Caliban, a human commrach half-breed, who seems to hate everyone, who lies and cheats, and seems thoroughly untrustworthy. And this is our group of heroes. This is the noble band that is going out into the world to stop an evil cult and save everyone.

But despite all of these flaws, despite every single one of them being terrible in some way, you can't help but like them. You slowly see connections begin to form between them. They start to trust each other, they begin taking risks for each other, and they start bringing the best out in each other. By being forced into this situation none of them actually want to be in they get to grow and evolve, becoming fairly decent people. By the end of the book I was loving spending time with them, to the point where I was sad to see the book end because I wanted more time with the weird little dysfunctional family. They'd come a long way, and I wanted to see them grow more, to become even better and realise that they were actually pretty good people now.

About half of the book is set in the past, a few years before the main story, when Kyra was still living with her people. The Kyra we see here isn't a good person either, but is a very different one nonetheless. This version of Kyra sees herself as better than most. She's grown up in a position of extreme wealth an priviledge, of never really having to worry about not getting whatever she wanted. And this is where the main drive of her story in this era comes in. Kyra is finally being told what she can and can't do, and she's raging against that.

Kyra comes across a young woman, Shen, who challenges her in ways she's never seen before. Shen comes from a small town, outside of the city of Corso. She doesn't like the system that The Isle has, she doesn't like the way their society is, and she refuses to fit into it the way everyone expects. This intrigues Kyra, draws her in, and when she realises she loves Shen it sets her on a new path from the one where she thought she'd spend her days drinking, playing, and sleeping with any woman she desired. Her life is also disrupted in other ways as her grandmother has arranged for her to marry a man from a rival house, despite Kyra having no interest in men. Now Kyra is trying to work a way out of it, having to engage in plotting and politics in ways she's never had to before; and it pushes her abilities to the limit.

This Kyra is a schemer, but also a dreamer. She thinks that if she can just figure out the right plan, come up with a clever enough play she can outwit her grandmother's machinations. Despite only being set five years before the main events of the book this Kyra feels so much younger, and it shows how much her time on the Mainland has changed her. But these sections aren't just an insight into her, but her people as a whole.

The human world of Pennyblade is very similar to our own history in a lot of ways, albeit a world with magic and the existence of elves. The commrach society, on the other hand, is very different. Whilst the human world is ruled by capitalism and religion, with the poor forced to live in squalor, and queer peopl persecuted, the commrach have none of this. There might be different levels in their society, but none are left on the streets to survive on their own. They aren't ruled by puritanical thinking, and sex and queerness aren't seen as anything to be ashamed of or hidden away at all. The vast majority of elves seem to be open to all genders, with the odd exception being those born twins, where they're born homosexual. And the elven society even has trans people, who are never treated as anything but their actual genders, and not what society believes them to be.

But that doesn't mean the commrach are perfect, as there's a lot in their world that seems brutal, or even openly sadistic at times. Worrad hasn't just created a race of people who are humans with long lives and feelings of self importance. The commrach feel completely alien in a lot of ways. They're a society so unlike the human one, shaped not just by their long different history, but by the fact that they're so different to us biologically too. It's one of the most interesting take on elves I think that I've ever seen, and it makes for a fantastically compelling read.

Pennyblade is a book filled to the brim with amazing, interesting ideas, with characters that are flawed and awful, yet so wonderful at times too. There are no big fantasy hero archetypes here, just imperfect people in an imperfect world, trying to balance the scales out a bit by doing a little good whilst they can. Whilst this book is a perfect story all on its own, and I loved every moment of it I truly hope that this is a world that Worrad revisits in the future, as I'd love to see more. 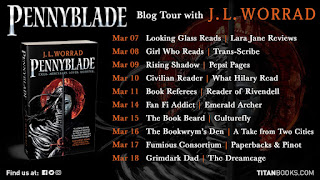 I got the chance to ask the author some questions about Pennyblade, the world that he created, and any plans for the future.