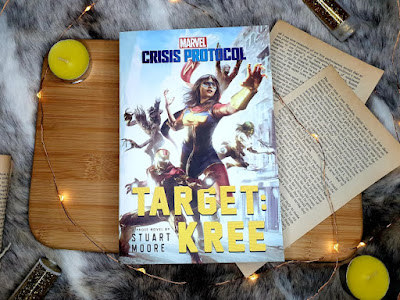 'The Avengers clash with the Guardians of the Galaxy in a desperate search for a planet-killer, in this action-packed novel set in the world of the Marvel: Crisis Protocol game

'Following the destruction of their world, a group of Kree refugees come to Earth to work for Stark Enterprises. But the Guardians of the Galaxy arrive soon after, believing that the world-killer is actually one of those Kree, now hiding out on Earth. But there are others after the killer too, and the Avengers have no choice but to respond – and both Tony Stark and Ms Marvel have to choose between the fate of the Earth and the people they care about.'

The Marvel: Crisis Protocol miniature game gets its first novelisation from Aconyte Books this week as the Avengers and the Guardians of the Galaxy end up embroiled in a plot that has already seen the destruction of an alien world, and might now see Earth lost too.

The action begins on a distant Kree planet, where thousands of inhabitants are trying desperately got get aboard a handful of vessels as the planet is torn apart under them. Trying to manage the mad dash to the limited escape vessels, the Guardians of the Galaxy are doing what they can for the people; though it soon becomes clear that they're not going to be able to save everyone. Trying to find out why this is happening, Gamora manages to see a lone figure inside the centre of the energy that's tearing the planet apart, indicating that this isn't a natural disaster, but the actions of an outside party. Sadly, the Guardians are unable to stop the planet's destruction and tens of thousands are lost; including one of their own.

Several months later, one of the ships that was able to flee the destruction has managed to find a new home for it's people on Earth, where Tony Stark has agreed to provide them with housing and support in exchange for giving them jobs inside his company. However, things don't seem to be as good as the Kree hoped, and thanks to someone below Stark taking control of the project the refugees have become little more than slaves, living in squalid conditions, and forced to work themselves to exhaustion.

This information has barely been brought to Tony's attention by the Kree's lawyer, Jennifer Walters, also known as She-Hulk, when the Guardians turn up on the scene. They're convinced that the planet killer is amongst the Kree trying to build a new life on Earth, and have set their sights on getting revenge for their former team-mate.

Now Tony and a handful of his fellow Avengers have to stop the Guardians from possibly attacking an innocent person; but it soon becomes clear that there might be more going on than anyone suspects, and that a planet killer might be under their noses, just waiting to destroy Earth too.

Sometimes when comic book characters make the leap to other mediums they end up in the hands of people who don't really understand what it is that makes comics work, and you end up with stories that feel too far removed from their source material. Luckily, this book manages to avoid that by actually getting a comic book writer to take on the challenge.

Stuart Moore is a name that some comics readers might recognise, as he's written several big name titles at Marvel over the years; including Iron Man: Director of S.H.I.E.L.D., Wolverine: Blood Sorrow, and Thanos: Death Sentence. This isn't Moore's first foray into bringing comic characters to prose, however, as he's also created several prose novels over the years that both adapt existing comic stories as well as ones that are completely new creations.

Moore is one of those rare authors who just seems to completely understand what makes comics work, and knows how to transplant them into a new medium without losing any of that magic. Because of this Target: Kree flows extremely well, and whilst there is plenty of action and spectacle mixed in with character moments and story beats, the two are never fighting against each other for centre stage. Just like with comics, it's managed to find this wonderful balance where you can come for the characters, to see what happens to them and their stories, but also enjoy some over the top, epic fight scenes that leave you feeling awed.

The book really manages to capture the essence of a lot of these characters too, and you can tell Moore knows them well. Everyone has a very distinct voice, and feels really different from each other; which is no easy feat considering how many established characters actually end up featuring in the book once everything's said and done. Some of the members of the Guardians of the Galaxy are particularly stand-out, with both Rocket Raccoon and Drax being a ton of fun to read whenever they're on the page. But if I were to pick one character who really stands out it's Ms Marvel.

Ms Marvel is the one character in the book that I'm the least familiar with, and I've not read as much of her stuff as I have the other characters. That being said, I found that I got to know her pretty quickly, and soon came to like who she was. Moore managed to make her feel young and hopeful, filled with worry about if she's good enough to be a hero, let alone an Avenger, yet also determined to help out and try to make the world a better place. She had an energy to her that I think was sometimes lacking from the older, more world weary characters; and if I have one real criticism of the book it's that we didn't spend enough time with her, because she was just delightful.

Aconyte Books have published some other Marvel books, most of which focus on a small handful of characters at most, and even then they'll still put the main attention on one character in particular. But this is the first of their Marvel novels that really showcases a big cast of characters, where everyone gets a moment to shine and the story isn't afraid to jump around as it shows us what everyone's up to. And it really works. It shows that novels are goof for telling focused, character driven stories, but also big bombastic stories where scores of heroes are having to fight to save the entire planet.

One of the most exciting parts of the entire book, however, is the end, because it seems to be setting up for more exciting things to come. One of our heroes from this book is being recruited by a new band of iconic characters to go on and fight a particularly menacing foe; and I really hope that this is setting up for a follow-up because I really need the book that seems to be promising.

If you love superheroes getting in fights with each other, if you like bug team ups against powerful foes, if you like stories where the stakes are the entire planet, and if you're a fan of comics this is the kind of novel that will appeal to you. It throws so much at the reader that you're constantly on your toes, excited to find out what's going to happen next, or eager to see which hero might appear at the last minute to help save the day. A ton of fun that every geek is sure to love.