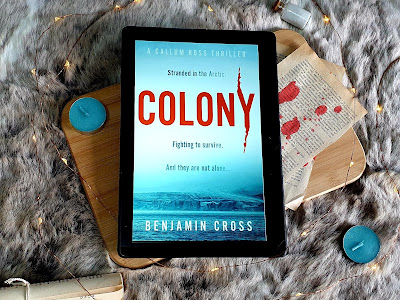 'Harmsworth. A remote, mist-shrouded island in the Russian Arctic. Archaeology Professor Callum Ross makes the discovery of a lifetime: a prehistoric ice mummy preserved for thousands of years by the sub-zero temperatures. Only, they didn't die of natural causes...

'As Callum races to unravel the mystery of the mutilated corpse, others race to sabotage the expedition, and he and his team are left stranded on the island. And they are not alone. Someone, or something, relentless is stalking them. As the arctic mist descends and the death toll rises, the team is thrust into a nightmare fight for survival, involving submarines, cyber warfare and Spetsnaz. But none of this can prepare them for the real terror that survives deep within the island’s heart: a secret so ancient it's been overlooked by time itself.'

Colony begins in the distant past as we follow the journey of a Neolithic hunter as he makes his way across the frozen expanse of the Arctic, searching for something. After falling into a deep ice cave he soon finds himself at the mercy of some unseen creature, one that makes short work of the brave warrior. With this one small scene writer Benjamin Cross sets the tone for a book that is steeped in atmosphere and fraught with danger.

Jumping forward several thousand years, we join archaeologist Callum Ross as he's pulled away from his holiday with his son by a colleague of his who needs Callum to take his place on an expedition to the remote Russian Arctic, where a team of scientists are exploring Harmsworth island as part of an investigation that could have a big impact for the Russian companies that want to begin drilling for oil on the remote wilderness.

Callum is just one of several scientists, from all kinds of fields, and expects to find little archaeological evidence on the island, but when he discovers the frozen remains of an ancient hunter it sparks a mystery as to what could have killed this man all those centuries ago. Unfortunately for Callum, he will get his answers when corporate sabotage and eco-terrorism leads to him and several others being stranded on the island when their ship is destroyed. Not only do they have to find a way to survive in the extreme conditions of the Arctic, but they're also being hunted.

Over the course of the book we begin to discover what these creatures are, though there's a pretty big clue early on that makes it an obvious leap of logic as to what these things used to be, though it's one that the actual characters seem to take a little longer to get to. It makes it somewhat amusing to see them trying to puzzle out what's really on the island using scientific processes, when if they took a step back a moment and took a less precise examination they'd get to the answer a lot quicker. But then a lot of the fun of these kinds of stories is being a step or two ahead of the characters and seeing them trying to play catch up with the reader.

In a lot of ways the book reminded me of the Meg series by Steve Alten. It deals with a group of scientists having to fight for their lives against vicious killer creatures that are the stuff from history and legend; and like some of the later books in that series and it's sister series The Loch, it takes place in a remote, frozen location. It definitely made Colony more enjoyable for me, reminding me of a series that I love, and much like those books it doesn't just rely in killer creatures to keep things interesting, throwing in corporate espionage and shady dealings too so that there's a much more recognisable and human enemy in the mix.

The characters make for an interesting mix of people too, and none of them are perfect. It would have been easy to have Callum end up being a big hero, for example, when things started to go wrong, but he's not. He's imperfect. He struggles in survival situations, having to grab for nearby weapons and hoping they'll work; he's not an expert gunman mowing down hordes of creatures whilst he protects his new girlfriend. He's also very human in his personal life thanks to the relationship he has with his son, and the struggles he goes through to try and be a good father whilst juggling his work. It makes him feel like an every-man, the kind of person you yourself might know and be friends with, and it helps to ground the more fantastical elements of the book.

The supporting characters are equally well made, and most of them get small moments to shine along the way. We get a good sense of what drives them, and quickly begin to learn how they're going to react in certain situations; who will step up to the challenge and who will falter under pressure. Even those characters who end up being revealed to have ulterior motives, who end up bordering on villainous, manage to make you feel something, and you end up rooting for them to do the right thing because you just don't want to hate them. There was one particular character in the book whose death actually made me cry a little, but I'm not going to tell you which one.

Colony is a fun book, one that takes a fantastical premise and takes it seriously throughout. It doesn't enter hammy or silly territory, and works so much better because of that. This is the kind of story that under other writers could easily be seen as ridiculous or over-the-top, but Benjamin Cross manages to make it engaging, tense, and emotional throughout.