The Sword of Surtur by C.L. Werner - Book Review 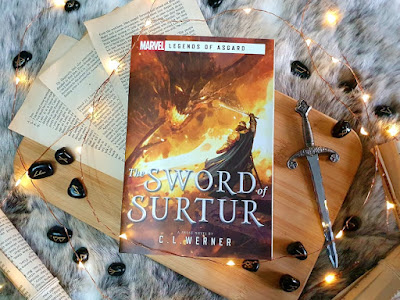 'Envy drives the God of War into a realm of fire to reclaim his glory, in this epic fantasy novel of Odin’s greatest heroes, in Marvel’s Legends of Asgard

'Tyr, God of War, elder brother of Thor, embarks on a quest to regain his honor and place at Odin’s side. Spurred on by loyal young Bjorn Wolfbane and the bewitching Lorelai, the trio set out to steal a sliver of Twilight, sword of the fire giant Surtur, who will one day bring about Ragnarok and destroy Asgard. But the fiery realm of Muspelheim is fraught with volcanic trolls, lava kraken, and Surtur’s brood of murderous warriors. Tyr must overcome his own feelings of inadequacy and the motives of his allies or risk triggering the apocalypse and cursing his name forever.'

The Marvel Legends of Asgard range is one of the more interesting series that Aconyte Books is producing, due in large part to the fact that I have to keep reminding myself when reading them that these stories are actually taking place in the Marvel Universe. The Sword of Surtur, and the previous book in the series the Head of Mimir, feel like more than simple super hero stories, stories about larger than life costumed heroes fighting criminals; these books are huge, sweeping fantasy epics that stand out from the rest of the Marvel novels the company are producing, and are ideal for anyone unsure if they'd get on with a comic novel.

The Sword of Surtur follows one of the less features sons of Odin, one of the brothers that never gets as much time in the spotlight as the heroic Thor, or the duplicitous Loki; this book centres of Tyr, the God of War. I'd only seen Tyr in the Marvel comics once of twice, and then not for very long, and whilst the character did feature in one of the Marvel movies it's not made clear exactly who he is, as such, I honestly didn't know that he was one of Odin's sons before I started to read this book, believing him to just be another one of the gods.

This familial connection, and the fact that Tyr is often overlooked and forgotten in the place of Thor is one of the main themes of the book, and is a major driving force for everything that happens here. Thor is being celebrated for his brave feats, even though what he did was foolish and reckless, whilst Tyr is left feeling forgotten. He was the god who bravely gave up his hand to bound Fenrir, the giant wolf who would play a part in Ragnarok, who allowed the great beast to bite off his hand in order to secure Asgard's safety; yet here is Thor being called a hero for needlessly putting his life at risk for glory.

It's a situation that I think we can all identify with, though I hope none of us have had to let a wolf eat our hand. It's the kind of scenario we've all been a part of before. We've done something because it was the right thing to do, or because it helped people and we've had to watch others who have done a whole lot less get heaped with praise. It's the kind of jealousy that we've all experienced, and that apparently even gods are susceptible to.

Rather than wallow in his jealousy Tyr decides that he needs to do something that will eclipse Thor's deeds, something that is not only brave and daring, but will benefit people. As such, he sets out to travel to the fiery land of Muspelheim in order to steal the sword of the fire giant Surtur. Not only is this a task that will put Tyr against almost insurmountable odds and foes worthy of song, but if he succeeds he will be able to steal the weapon meant to play a part in Ragnarok, therefore ensuring the end of times can't come to pass. It's a mission he'll need help with, however, so he's joined by the brave warrior Bjorn Wolfsbane, and the enchantress Lorelai.

The trio proves to be an interesting team, especially thanks to Lorelai's abilities to bewitch men and make them fall in love with her, which creates some tense moments when the two men begin to fall victim to her enchantments and their friendship is put to the test. Despite having seen Lorelai played as a villain in the past, thanks to an episode of Agents of S.H.I.E.L.D., I enjoyed seeing her played as something of a hero, though one you never trust one hundred percent. She gives the team a different kind of energy, especially as she brings magic and spells to a group that would otherwise rely on brute force to achieve their goals.

I also really enjoyed how The Sword of Surtur felt in relation to the other Marvel Legends of Asgard book that Aconyte have released, and how the two novels work well together. At first glance they're both pretty similar, following a small group of heroes travelling to another realm to get their hands on a mystical artefact and bring it to Asgard. However, they're quite different, and can act as mirrors of each other. The Head of Mimir follows a couple of people of who aren't lauded heroes, who no one will listen to, as they travel to a realm of ice and snow to retrieve something stolen from Asgard that's being used to put the kingdom in peril; meanwhile The Sword of Surtur sees characters who are well know, celebrated heroes in Asgard travelling to a realm of fire in order to steal something that doesn't belong to them to prevent a future attack on Asgard. The two books seem to be flipped scenarios of each other, but instead of feeling similar they're both so different, and show different sides to the world of Asgard, and the heroes that live their.

The Sword of Surtur is, at its heart, a fantasy novel. It's a book about brave heroes clashing with forces of evil, fighting against monsters and devils, with swords and sorcery being used as weapons. It's the kind of fantasy you don't see get the limelight much anymore, where things don't have to feel too grounded, where the fantastical isn't hidden away or explained as something else, but is embraced. This is a story that doesn't just take inspiration from the myths and legends that inspired the Marvel books, but celebrates it. If you've never picked up a comic before, if you're not sure you'd like heroes fighting costumed villains with over the top plots, this is the kind of book that can show you that there's more to comics than that, and that those universes can easily make the jump to prose without losing any of their magic.