The Harrowing of Doom: A Marvel Untold Novel by David Annandale - Book Review 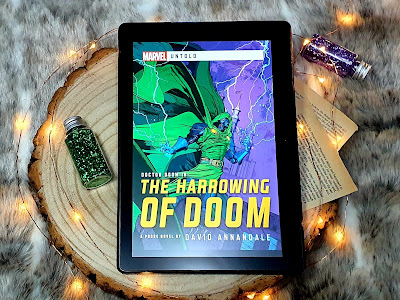 'Notorious villain Doctor Victor von Doom has finally found a solution for his oldest obsession: rescuing his mother’s soul from the clutches of Hell. An alliance with the reclusive sage, Maria von Helm, has provided the key to Doom’s latest invention. Fusing their super-science and sorcery, Doom has created the Harrower, a device that will open a rift and wrench his mother’s soul from the netherworld. Back in the human world, however, rebel forces threaten to overrun Latveria and topple its dark leader – and revolution couldn’t come at a more dangerous time than when the gates of Hell itself have been unlocked.'

Whilst I'm not a huge comics reader, and haven't kept up to date with many of the happenings in the current Marvel Universe, I have experienced a number of stories that have featured the character of Doctor Doom over the years, and have come to enjoy the character somewhat. He's the ruler of a country, is able to leverage that to gain diplomatic immunity much of the time, is a genius level scientist and creates amazing technology, and he's a sorcerer able to go toe to toe with some of the most powerful magical users in the Marvel Universe. What's not to love about that?

The Harrowing of Doom presented one of the first real opportunities for me to actually get to know spend time with the character in a scenario where he's not an antagonist, however, and I found this change to be a fascinating one. It's easy to make Doom into an arch villain, just look at his name, but to make him a character that you can understand, whose actions you can agree with, and who you can actually see as a hero, that's not something I think many writers would be able to achieve. It's a level of moral grey that is hard to capture, yet David Annandale not only did that, he made me a major fan of the character.

The story focuses on one of the biggest driving forces in Doom's life, his desire to free his mother from the forces of Hell. Having made a deal with the extra-dimensional demon Mephisto, Cynthia von Doom gained the power to try and give her people a home free from tyranny, but fell in battle and her soul was sent into the bowels of Hell. Now, every year Doom has one chance to free his mother, where every summer solstice night a champion of Hell is sent to challenge him in single combat. If Doom can beat this champion, his mother will be freed. Doom know this will never happen, however, that he will never be able to beat Hell in this contest, so hatches a plan of his own, one that will bring the fight to Hell itself.

Recruiting a number of allies to his cause, including the powerful sorceress and former friend of his mother, Maria von Helm; and Zargo, a priest who used to study the occult and the nature of lay lines, yet harbours a hidden power even unknown to himself that Doom needs. Using all of the forces at his command, Doom spends an entire year building a device of mystical and technological perfection named The Harrower, which he intends to use to storm Hell and free his mothers soul. Not only is this a risky plan, one that will push Doom to his limits, but he also has to contend with Prince Rudolfo Fortunov, the son of the former king of Latveria, who wants to take his kingdom back from Doom with a guerrilla war.

The Harrowing of Doom really does focus on its lead character a lot, and I don't think I've ever spent more time with him. Not only does the book give you a great deal of insight into him, into what drives a man of such power, but also how he fits into the larger Marvel Universe, especially in regards to Latveria. I honestly don't know if many comics have gone into the details of Latveria, at least none I've read have, but I know that he's a character that's supposed to be loved a great deal by the populace. This book really shines a light onto why.

There's a passage in the book where a character is questioning why people would follow Doom, and they're given a pretty convincing response. Latveria has free healthcare for all citizens, free education to any level a person could want, they have more than enough food and power and resources to make life comfortable for all. Homelessness and petty crime are non-existent. It's a country where people have been given a chance at the best in life, and after coming out of a fairly brutal dictatorship under the former king too.

There was a moment in the book that really took me back, it was when we learnt that the leader of Doom's forces, his right hand woman, was married to another woman. I thought, cool, Latveria is pretty good for queer people. Then it's revealed that her wife is also trans, and that she had to flee Latveria because of this under the former king, and it was only Doom's rule that allowed her to return and live her life openly and without fear. This absolutely floored me. Doom is seen as a villain in the Marvel comics, yet his country is a safe and fair country where trans people can not only live without fear of prejudice but also excel in their fields. Fuck yeah. I want to move to Latveria now. Doctor Dooms says Trans Rights!

There are so many moments in this book where readers get to see how much of a good, and fair ruler Doom is. He cares about his nation, and the people in it, and this love for his people shows through more than once; and even results in an amazingly selfless moment towards the end of the book. I went into this story expecting to come out liking Doctor Doom a little more, I never expected to end up seeing him as a hero.

The story has a lot of twists and turns in it, especially in relation to the story involving Prince Rudolfo and his mission to overthrow Doom, which means that you never have a chance to get bored or think that the story isn't moving fast enough. Yes, it takes Doom a year to build his machine, but there's so much that goes on during that time, so many characters that get to take the spotlight and to develop that the book never feels like it's not doing something interesting.

The Harrowing of Doom not only sheds light onto the character of Doctor Doom, but the nation of Latveria as a whole, and gives readers valuable insight into one of the more interesting corners of the Marvel Universe, one that I can't help but feel is often misunderstood.