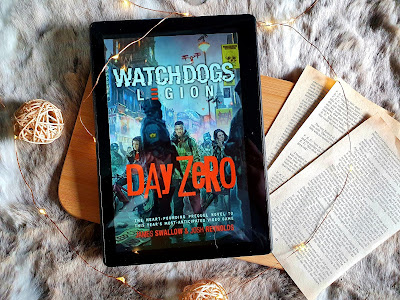 'Bike messenger and wannabe troublemaker Olly Soames is the newest recruit to DedSec’s Resistance movement, but when a stranger is shot dead in front of him, he realises that danger is closer than he thinks…Sarah Lincoln is an aggressive young politician with questionable methods and big ambitions, and when a string of murders unfolds in her borough, it may be the opportunity she has been looking for to make a name for herself…

'Ex-MMA fighter turned leg-breaker Ro Hayes is in deep with the vicious Clan Kelley, the most brutal organised crime firm in the city’s underworld, and her survival rests on uncovering a dead man’s secrets…And for Danny, Ro’s estranged brother and former soldier, his new career with private military contractor Albion is leading him down a very dark path, toward choices he may never be able to take back…

'Four lives are drawn into a murderous conspiracy that threatens to destroy Dedsec and plunge the city of London into chaos. Something very bad is going down in London town…'

I've played the first two Watch Dogs games and really enjoyed them, though I did prefer the narrative of the first game more as the second one felt a bit less engaging. But, I enjoyed the open world of the games, running around hacking into tech, collecting things around a huge map, and generally messing things up for big, evil corporations. I've been eagerly awaiting the release of Watch Dogs: Legion to get some more of this great franchise, though admittedly awaiting a second hand copy because I don't really want to support Ubisoft, one of those real life evil corporations.

Luckily, in the wait to play the new game I've had the chance to read the official prequel novel, Day Zero: A Watch Dogs Legion Novel. The book follows a handful of people across London as the private security firm Albion tries to get approval to take over for the police across the city. Opposing them are a number of politicians, as well as members of the underground hacker group Dedsec.

However, when a seemingly random man is shot dead at a political rally things in London begin to spiral out of control. A new courier for Dedsec, Olly, finds himself thrust into the centre of a conspiracy against Albion, and has to work alongside one of the organisations best to try and track down the killer. Meanwhile, one of the Albion troops, Danny, discovers that his sister Ro is working for one of the biggest criminal gangs in the city, something that puts them at odds with each other. The three of them end up being drawn together in a plot that's bigger than any of them could imagine, and one that sets the stage for sweeping changes in the nations capital.

A lot of the time with video game novel tie-in's you'll get a retelling of the events of the game, or possibly a sequel story that's quickly dismissed as not being canon when the next game in the series comes out. These books can be fun, but tend to have little impact to the universes they're set it. This book, however, feels a little different. I've not had the chance to play the game yet, but I've seen a lot of trailers and behind the scenes videos for it, and know that some of the characters that appear on the periphery of this story will be making appearances in the game, like Mary Kelley and Nigel Cass; it also benefits from being able to set up a lot of the background for the game, things which hopefully won't later be retconed away.

There are, however, a few characters in the book that I've not seen referenced in any of the promotion for the game, and these tend to be the characters that the readers get to follow. It could have been easy for the writers to pick a character like Sabine Brandt as the main protagonist, someone who would go on to play a big role in the game. The problem with doing something like that, however, would be that some readers would know that she's in the game, that she would have to survive the events of the book in order to appear later on in the timeline. By creating brand new characters for the novel Swallow and Reynolds are making it so that you're having to stay on your toes throughout, and are never sure if the heroes are going to make it out alive.

Sadly, the main characters are never really given a chance to really be focused on beyond what's strictly necessary for the story, and some like Olly come away feeling pretty underdeveloped as a result, especially when compared to Danny and Ro who do get quite a bit of their backstory given. However, the characters don't really come away feeling hugely important, instead it's the wold that is. Reynolds and Swallow are given the task of setting up the London that people will find in the game, to explain how things got to the point where armed militia are patrolling the streets. Yes, I'm sure that this will be gone into in the game, but getting to see it unfold in front of me in a book is so much better than having characters tell me about it in game, or having to piece it together by unlocking things in game.

I was hoping that the book was going to be a good read, having been familiar with the work that Swallow and Reynolds have done in other franchise, but was worried that this might be another throw away game tie-in, one that felt cheap,rushed, or inconsequential. Luckily, it was everything I was hoping it was going to be, and got me very excited to play the game. A brilliant introduction to the new game.