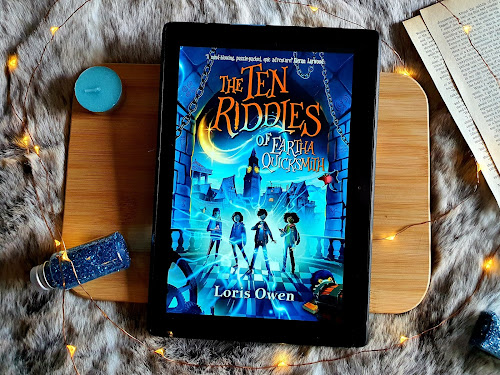 'Welcome to the dazzling new world of Quicksmiths, where you will encounter Strange Energy, the Mowl, Wormholes, Dark Forces and the tantalising riddle of the Ark of Ideas.

'When Kip Bramley receives a cryptic invitation, delivered by a beetle shaped drone which appears to be breathing, his world will change forever. Soon he finds himself chasing riddles and solving puzzles on a crazy treasure hunt set 400 years earlier by a mysterious genius. As things get dangerous, it seems much more is at stake for Kip and his family than winning top marks at his strange new school.'

There's a popular trend in middle-grade books that sees a young hero discover a world of magic and monsters, being whisked away on some kind of adventure, or even to a magical school, where they learn all about this new world. This has been a popular trend for years, even before Harry Potter came along and got famous doing it. In a plethora of books that follow this kind of 'chosen one going to a special school' genre it can take something special to make it feel new and interesting, and this is precisely what Loris Owen has managed to do with The Ten Riddles of Eartha Quicksmith.

The Ten Riddles of Eartha Quicksmith follows Kip, a young teen who's recently moved to a new school in London when his father relocates for work. It's been just the two of them for a few years, ever since Kips sister disappeared and his mother suffered a nervous breakdown that has left her in a care facility. Kip's a fairly bright young student, and loves solving puzzles and playing games, but is finding it difficult to make any friends.

When he's suddenly approached by a mysterious drone and receives a strange coin he begins to discover a puzzle that leads him to Quicksmith's a hyper advanced school dedicated to Strange Energy, a branch of science that most of the world is unaware of, let alone unable to understand. Kip is told that he has an affinity for understanding Strange Energy, and is offered a place at the school.

Like I said, it's not a huge leap to see how this book is similar to things like The Worst Witch, but it being focused on science and technology rather than magic immediately gives the book a feel that's all its own. There's not teleportation spells, there's wormholes; there''s not broomsticks, but flying hover boards. Things that you come to expect from similar stories are given a fresh new coat of paint, and it feels so much more creative because of it. Okay, some of the science isn't fully explained, and is so far advanced and does some miraculous things that it might as well be magic, but I'm quicker to believe that someone with a different grasp of time can create a device that can temporarily freeze people over someone waving a wand or saying a magic word.

This refresh of the genre also play into the plot in ways that make it new and exciting. There's not some vague magical prophecy that sets Kip on an adventure, but a series of events set up centuries before by a scientist so smart she was able to bend space and time and see what was going to happen. It means that Kip isn't special because he's fulfilling some mystical role, but because he's a smart person, who thinks quickly on his feet, someone just saw him doing this by peering into the future.

Kip, and his schoolmates, are given a special task when a series of puzzles set up hundreds of years ago begin. Eartha Quicksmith, the school founder, was a scientist ahead of any of her peers, and has a hidden cashe of research and technology that was hidden away and never found. Now the school had just ten days to solve the ten riddles that will lead them to her ark, and her secret technology. Whilst some are searching for the ark for glory, others to be able to discover secrets that could advance humanity's understanding of Strange Energy; but Kip is different. He's hoping to find something inside that can help to make him mum better.

This selflessness and desire to heal his mother makes Kip an incredibly kind and sympathetic hero. So often we get characters who want to go and have an adventure, or are pushed into situations by events or forces outside of their control, but Kip is different. He doesn't really want to be putting himself and his friends at risk, but his desire to have his mother back outweighs that. There are times during the book where Kip thinks that his time at Quicksmiths might be over, or that something could happen to take him out of the quest, and his only thought in those moments is that he's letting his mother down. His drive to save someone he loves is so relatable and so pure that it makes him one of the noblest middle-grade heroes I've read in a long while.

The book manages to keep events moving at a really good pace, and keeps the reader interested throughout. It also packs in plenty of excitement and surprises, along with a host of supporting characters that are a load of fun in their own right. Thankfully, it seems that not everything is fully resolved by the end of the book, and there are plenty of threads left hanging for future instalments. I hope this is something that's going to happen, as I'd love to read more about Kip, and his mission to save his family.