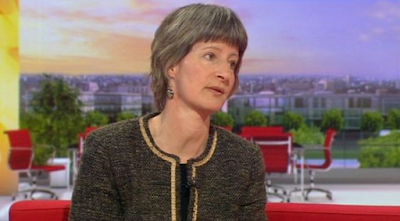 A member of the Tory activist group Grassroots Conservatives, Mary Douglas, has faced criticism after her appearance on BBC Radio 4's Today programme after suggesting that people that wish to legally change their gender are mentally ill.

The discussion follows announcements from the government that they intend to review and update the Gender Recognition Act, an announcement that has sparked outrage for many anti-trans groups and individuals.

Mary Douglas appeared on the BBC radio show to criticise this decision, saying that she was 'very concerned' by these plans.

'In my view, it should not be easy to do something as massive as change your gender and the law is there to protect us, normally from other people, but also sometimes from ourselves,' she described her views to host Nick Robinson.

'If somebody thinks that they have a mismatch between how they think and the way their body is, the question is: which should be changed?'

'What's interesting is that many people who have gender dysphoria also have other mental health conditions like depression or drug addiction. They are deeply troubled, and it has been proven that when they change gender that doesn't solve those issues.'

When Nick Robinson went on to ask her to clarify if she believed that wanting to change your gender to be a mental health condition she went on to say: 'I'm not a doctor, but I have read doctors who think it is and until very recently that was the medical consensus. I don't see that anything has changed.

'If for example, you have someone with anorexia who says 'I'm too fat' and you look at them and go 'really, you are not', it's not actually respectful or loving to affirm to that person in a belief that is false, that doesn't tie up with reality.'

After making her comments many people took to social media to condemn Mary Douglas and her views. 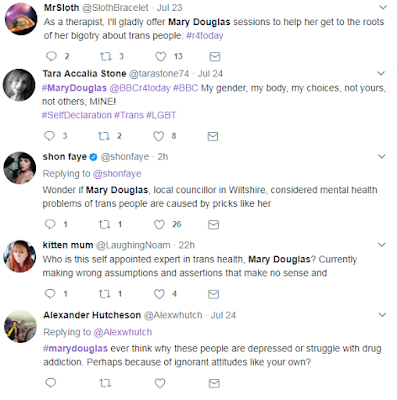 Some members of the Conservative party themselves made strides to distance themselves from Douglas' comments. Former chief of staff to Brexit Secretary David Davis, James Chapman, wrote on Twitter that he found the comments 'disgraceful'.

Despite many taking the time to condemn her comments a handful of people have agreed with her, supporting her notion that wishing to change your gender is a sign of mental illness. 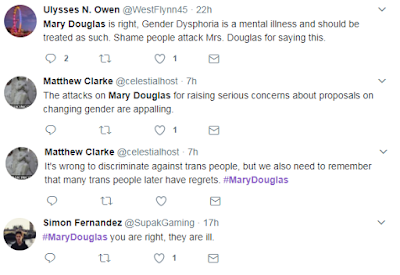 Whilst Mary Douglas is not a member of the Tory government she does hold a position of respect within the Tory community; enough at least to be asked to speak on the BBC regarding decisions made by the party and how they are viewed by Tory supporters.

Many people have spoken out against Douglas' views, and have pointed out that having an opinion like this is wrong; but this kind of blatant transphobia is something that is still rooted deeply within society and politics.

Mary Douglas asked, 'If somebody thinks that they have a mismatch between how they think and the way their body is, the question is: which should be changed?' Whilst innocuous on the surface asking is a body or a mind should be changed is bordering dangerously close to the belief that trans people can be 'treated' to change how they view themselves.

This kind of treatment is more commonly known as Reparative Therapy or Conversion Therapy, and is used to 'correct' non-hetrosexual and non-cisgender people. It's designed to alter someone's gender identity or sexual orientation, and is often extremely traumatic and physically harmful.

Whilst many see such kind of treatment as inhumane it would appear that Mary Douglas is quite comfortable with the idea of altering gender variant people's minds to match their bodies by the comments she made.

In regards to transgender people having other mental health issues such as depression and drug addictions, whilst many studies and organisations do agree that the trans community are more likely to suffer from depression and to be drug users they also agree that this is not due to being transgender; rather it is because of the way in which society treats trans people.

I myself suffer from depression, I take medication for it, I've self harmed, and have even attempted suicide. This is not because I'm transgender. Yes, I am depressed because my body does not match who I really am, but this isn't the reason why I have suffered.

I've hated myself and have considered taking my life because people treat me like shit, and most of society not only doesn't stop them but actively reinforces that it's okay to do so.

Mary Douglas is right in saying that trans people have mental health issues; but it's because of people like her trying to make our lives hell, trying to make it harder for us to be ourselves, for being othered and demonised.

The plans to re-evaluate the process to legally change gender is a good step forward, though one long overdue. It's just unfortunate that individuals like Mary Douglas are still given a platform to spread their own bigoted views in the face of progress.