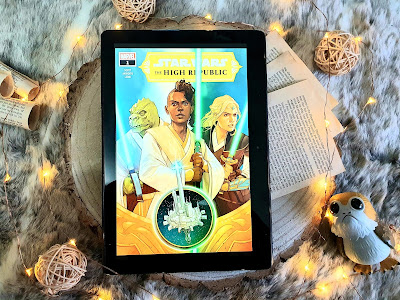 The High Republic has been coming for a while now, teased with some amazing artwork and brief glimpses of the story, this new age for the Star Wars universe has been one of the more anticipated parts of the franchise for a while now, and this month it finally arrives. As well as Light of the Jedi, a new prose novel by Charles Soule, readers also get to step into this new era in comics too, with Star Wars: The high Republic #1, written by Cavan Scott.

This first issue introduces new readers to the Stalight Beacon, a huge space station built by the Republic in the outer rim of the galaxy in the wake of The Great Disaster. The station will act as a beacon to those in this distant part of the galaxy, and will hope to bring the light of the High Republic to these remote systems.

We're also introduced to a number of new characters, the main one being Jedi Padawan Keeve Trennis, a young woman who has travelled to a remote planet with her master, the Trandoshan Jedi Sskeer, to perform her trial in order to prove herself ready to become a fully fledged Jedi Knight. Unfortunately, thing's don't go quite so smoothly for her, as disaster strikes the planet and its inhabitants.

Scott drops readers into a first issue that already has a lot of backstory to it, thanks to the aforementioned novel Light of the Jedi, and we see the High Republic dealing with the fallout of the events of that book. Despite this being a follow on from what came in that book it never feels absolutely necessary that you have to have read it going into this issue, and despite all of the stuff that's happening it feels really easy to slip into this new place, with these new characters. There are mentions of things that came before this, but the book manages to give enough context to those events for new readers to be able to follow along, without it feeling like he's going out of his way to explain things. It's very natural feeling, and because of this we're never bogged down in trying to catch up if you've not read the novel yet.

The book manages to balance the world building and construction of this exciting new era with characters and action really well too, and an issue that could easily become bogged down in world building and scene setting is actually a really fun adventure story too, one where we get to see Keeve shine, and she quickly becomes a character that you'll like and want to spend more time with. 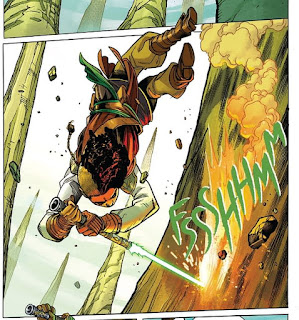 There are a number of characters like this in the issue, people like Sskeer, who ends up becoming one of the more mysterious and intriguing characters by the end of the issue, and Estan Maru, the Jedi who seems to be juggling a lot of balls by acting as a facilitator on Starlight, keeping track of everything that's going on. Both of these Jedi really fascinated me, and I'm hoping that they both get more of a chance to shine in upcoming issues of the series. The High Republic also features, briefly, a very recognisable character in the form of Yoda, who is much younger here, and not on the Jedi Council. Seeing just one familiar face in this new time really helped to ground the book, and reassure that this is a part of the ever expanding Star Wars universe, and it really helped to make this book feel like a part of the franchise even when doing bold new things.

The artwork for the issue is provided by Ario Anindito, Mark Morales, and Annalisa Leoni, and it all looks gorgeous throughout. The three of them really help to sell the idea that this is the Republic, and the Jedi, at their height, and the Starligh Beacon and its inhabitants all look grand and elegant, and have a sense of beauty and wonder to it that is sometimes missing from later eras of the Star Wars franchise. It wasn't until I came to look at the people working on the book come having finished reading it that I even realised that there was more than one artist on the book, because the three of them work so well together that it all flows beautifully together. Sometimes when a book features multiple artists it can be really obvious where the change over happens, and it can throw you out of the book, but that was never the case here; the whole thing looked wonderful.

If this first issue is any indication of the quality of the series going forward then this is one of the most exciting and engaging parts of the Star Wars universe in a long time, and one that holds so much promise. This is a time and place where anything can happen, where any type of character can turn up, where any of the heroes could die, and where some true wonders can happen. I can't wait to see what happens next!