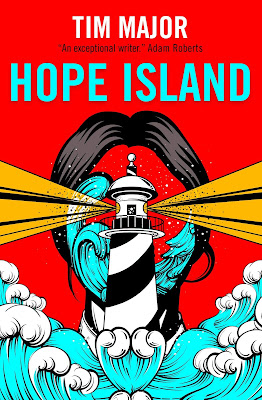 'Workaholic TV news producer Nina Scaife is determined to fight for her daughter, Laurie, after her partner Rob walks out on her. She takes Laurie to visit Rob's parents on the beautiful but remote Hope Island, to prove to her that they are still a family. But Rob's parents are wary of Nina, and the islanders are acting strangely. And as Nina struggles to reconnect with Laurie, the silent island children begin to lure her daughter away.

'Meanwhile, Nina tries to resist the scoop as she is drawn to a local artists' commune, the recently unearthed archaeological site on their land, and the dead body on the beach... '

I really enjoyed Tim Major's debut work Snakeskins, which came out last year. The mixture of  interesting science fiction, political conspiracy, and coming of age drama was wonderful to read, and made me very excited for Hope Island.

Hope Island was a much smaller story than I was expecting, in the sense that it was really the story of one family, and one woman in particular. Where Snakeskins had crafted a whole different world, this time Major focuses on a more personal level, as we see what happens when someone's world ends.

Nina Scaife has left her home and her all consuming job in the UK to travel to the US, visiting the parents of her partner Rob for the first time. Whilst she's never been to the remote Hope Island herself, her daughter Laurie has visited before, and Nina's hoping that her love of the island and her grandparents will make the news she has to break easier on them both. She plans to tell her teenage daughter, and Rob's parents, that Rob has walked out on them, leaving them for another woman that he's been seeing for years secretly.

We spend a good while with Nina as she struggles to find the right time to break this news. We see how much Rob leaving her has shaken a woman who seems to normally be a very strong and confident person. She's doubting herself, she' hurting. Add to that the fact that she's never really got on with her in-laws, and the fact that the island is remote and filled with strange people, it's a wonder Nina holds herself together so well.

Her whole life has been turned upside down, and she's having to face the possibility that she might not have been the best mother she could have, having put her career before her family for so many years. She's close to breaking.

I really enjoyed the switch from such a large scale story in Major's last book to this incredibly personal story, and so much of the first half of the book is given over to seeing Nina's reactions to these recent changes. She begins to lose herself a little, and it's a little like watching someone slip closer and closer to madness as you begin to realise she might be having something of an emotional breakdown.

Dotted throughout these early parts of the novel, however, are hints that something strange, and even sinister, might be happening on Hope Island. The children are weird. I don't just mean that they're into odd things or anything like that, you want to think Midwich Cuckoos type weird.

Whilst I did enjoy the personal drama that was happening in Hope Island that wasn't the thing I turned up for, I wanted the creepy horror that the blurb described. And whilst the book did get very creepy towards the end I couldn't help but feel that maybe we should have had some more stuff happen before to tease it out a little. Other than the kids acting very quite and a little off there wasn't much to remind me that this was supposed to be something of a horror, to the point where when things did become overtly horror I was almost taken by surprise as I was just reading a very real story about a woman whose relationship had just ended.

By the time things really started to happen we'd spent so long with Nina and her slipping emotions that there were a few things that happened where I was expecting it to be some kind of dream or hallucination. For some of these moments it was the case, but there was one particularly long and important sequence where I kept expecting Nina to wake up, so was thrown when she didn't. These kinds of feelings were exacerbated towards the end where the narrative kept flicking between the rel world and some kind of dreamscape.

I imagine this sense of confusion and paranoia were intentional on Major's part, to really put us in Nina's shoes, where you could never quite be sure if what was happening was real or not. It added to the sense of unease that permeated the book, but it also meant that I had to find myself concentrating hard on the narrative to keep track of things in my head; which did sadly take away a little of the enjoyment for me.

Overall, however, the book was very good, and Major was able to craft a slowly unfolding, creepy story that never gave you a moment to relax or feel at ease. The 'thing' that is behind the events (I won't really describe it in any way as to avoid spoiler) was something that I'd genuinely not seen before. It felt new and unique, something that almost couldn't work in any other format other than a written story. I was hugely impressed with the strange direction the book took towards the end, and how suddenly some of the weird little moments from earlier in the book all clicked into place and made perfect sense.

Hope Island subverted my expectations not only from the description, but also from what I was expecting based on Tim Major's other work. He's proven that he can craft a layered and intriguing personal story that will test the mind and push readers into bold new directions. A slow building and strange horror that's sure to stick out from the crowd.